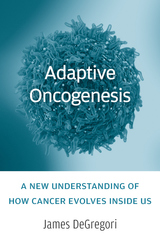 Popular understanding holds that genetic changes create cancer. James DeGregori uses evolutionary principles to propose a new way of thinking about cancer’s occurrence. Cancer is as much a disease of evolution as it is of mutation, one in which mutated cells outcompete healthy cells in the ecosystem of the body’s tissues. His theory ties cancer’s progression, or lack thereof, to evolved strategies to maximize reproductive success.

Through natural selection, humans evolved genetic programs to maintain bodily health for as long as necessary to increase the odds of passing on our genes—but not much longer. These mechanisms engender a tissue environment that favors normal stem cells over precancerous ones. Healthy tissues thwart cancer cells’ ability to outcompete their precancerous rivals. But as our tissues age or accumulate damage from exposures such as smoking, normal stem cells find themselves less optimized to their ecosystem. Cancer-causing mutations can now help cells adapt to these altered tissue environments, and thus outcompete normal cells. Just as changes in a species’ habitat favor the evolution of new species, changes in tissue environments favor the growth of cancerous cells.

DeGregori’s perspective goes far in explaining who gets cancer, when it appears, and why. While we cannot avoid mutations, it may be possible to sustain our tissues’ natural and effective system of defense, even in the face of aging or harmful exposures. For those interested in learning how cancers arise within the human body, the insights in Adaptive Oncogenesis offer a compelling perspective.
REVIEWS
With engaging prose and an authoritative review of new research, Adaptive Oncogenesis: A New Understanding of How Cancer Evolves inside Us corrects the fundamental attribution error that has focused cancer research on malignant cells and their genes. Adaptive oncogenesis, or ‘EcoOncogenesis,’ shows that the ecosystems surrounding cells are equally important, responsible for creating selection forces that speed or slow the evolution of cancer. With huge implications for prevention and treatment, this book is required reading for cancer researchers and clinicians, and a pleasure read for anyone who appreciates fascinating new science.', Randolph Nesse, Center for Evolution and Medicine at Arizona State University

'DeGregori’s vision of cancer as an adaptive ecosystem is insightful and cogent. Adaptive Oncogenesis: A New Understanding of How Cancer Evolves inside Us, an evolutionary explanation for the risk of cancer as we age, is a provocative and refreshing revision of the prevailing gene-centric paradigm.', Mel Greaves, The Institute of Cancer Research

'To understand how and why tumors progress, James DeGregori argues that we must apply evolutionary principles to cancer. This book is a seamless discussion of natural evolutionary processes, ranging from longevity in rodents to bacterial antibiotic resistance, and drawing parallels to tumorigenesis. It is a must-read for everyone who wants to understand tumor evolution.', Kornelia Polyak, Dana-Farber Cancer Institute

'To paraphrase Dobzhansky, cancer only makes sense in the light of evolution. In Adaptive Oncogenesis: A New Understanding of How Cancer Evolves inside Us, DeGregori challenges the commonly held view that it takes time for a normal cell to mutate into a cancer cell. He makes the compelling case that the ability to select against cancer becomes weaker as an individual gets older and the odds of reproduction decline.', Angelika Amon, Koch Institute for Integrative Cancer Research at MIT

'At every point in our lives, the body holds the mutations necessary to cause cancer; why then does cancer develop primarily at certain times or after specific exposures? With crisp thinking and engaging prose, James DeGregori’s surprisingly readable book argues that cancer is a disease caused by damaged tissues rather than gene mutations. The implications of this revolutionary work have the potential to change the focus of cancer research, and especially research on cancer prevention, with emphasis on using the body’s own calculus of natural selection to keep cancers in check.', Garth Sundem, author of Brain Trust: 93 Top Scientists Reveal Lab-Tested Secrets to Surfing, Dating, Dieting, Gambling, Growing Man-Eating Plants, and More!

'Adaptive Oncogenesis: A New Understanding of How Cancer Evolves inside Us is a highly readable and entertaining book, offering a fascinating new look at cancer through an evolutionary and ecological lens. With novel insights and thoughtful observations, James DeGregori guides his audience through the promise of new ideas, examining novel applications of Darwin’s principles as well as modern technological advancements connected to cancer biology and treatment.', Robert A. Gatenby, Moffitt Cancer Center