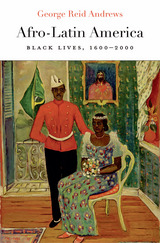 Two-thirds of Africans, both free and enslaved, who came to the Americas from 1500 to 1870 came to Spanish America and Brazil. Yet Afro-Latin Americans have been excluded from narratives of their hemisphere’s history. George Reid Andrews redresses this omission by making visible the lives and labors of black Latin Americans in the New World.