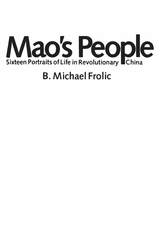 And so the city slickers, sent down to the countryside for political reeducation, set out to find the Thousand-Dollar Pig, much to the bemusement of the local peasants.

The sixteen stories collected in this remarkable book give firsthand accounts of daily life in contemporary China. From 250 interviews conducted in Hong Kong between 1972 and 1976, Mr. Frolic has created charming vignettes that show how individuals from all parts of China led their lives in the midst of rapid social change and political unrest. We hear about oil prospectors, rubber growers, and factory workers, Widow Wang and her sit-in to get a larger apartment, the thoroughly corrupt Man Who Loved Dog Meat, the young people who flew kites to protest antidemocratic tendencies.

As fresh and original as the individual accounts are, common and timeless themes emerge: the sluggishness of an agrarian society in responding to modernization; the painful lack of resources in a poor and gigantic country; the constraints imposed on common people by the bureaucracy; the way in which individuals outwardly support the system and inwardly resist it; the limitations of heavy and conflicting doses of ideology in motivating individuals.

But there are also recurrent motifs of economic and social progress: production rises, illiteracy declines, and socialist values have impact. A new China has emerged, though change is occurring far more slowly than its leaders had intended.

Mao's People contains much new information on China both for the general reader and for specialists in the field. Above all, it is a completely engrossing and vivid glimpse into the ways of a nation we are only beginning to discover.
TABLE OF CONTENTS