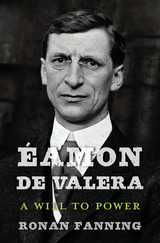 Éamon de Valera embodies Irish independence much as de Gaulle personifies French resistance and Churchill exemplifies British resolve. Ronan Fanning offers a reappraisal of the man who remains the most famous, and most divisive, political figure in modern Irish history, reconciling de Valera’s shortcomings with a recognition of his achievement as the statesman who single-handedly severed Ireland’s last ties to England.

Born in New York in 1882, de Valera was sent away to be raised by his mother’s family in Ireland, where a solitary upbringing forged the extraordinary self-sufficiency that became his hallmark. Conservative in his youth, he changed his name from Edward to Éamon when he became a member of the Gaelic League, the Irish language revival movement, in 1908. Five years later, he joined the Irish Volunteers, a nationalist military organization, and participated in the 1916 Easter Rising. Escaping execution afterward, he used his prestige as the senior surviving rebel officer to become the leader of Ireland’s revolutionary nationalists. But the iron will that was usually his strength became a fateful weakness when he stubbornly rejected the Anglo-Irish Treaty, sparking the Irish Civil War of 1922–1923.

De Valera’s vision for Ireland was blinkered: he had little interest in social and economic progress. But without him, Ireland might never have achieved independence. The nation was spared decades of unproductive debate on the pros and cons of remaining tied to Britain, and by 1973 it had enough self-confidence to surrender some of its sovereignty by joining the European Community.

REVIEWS
De Valera (1882–1975) is the subject of many biographies, including several authorized productions that he carefully supervised. But Eamon de Valera: A Will to Power, by Ronan Fanning, stands out…An astute, nuanced and highly readable life that manages to be both sharply critical and expansive in its judgments. In this era of doorstop biographies, Fanning deserves extra praise for accomplishing all this in a trim 300 pages.
-- Michael O’Donnell Wall Street Journal


The extraordinary story of de Valera’s emergence from a laborer’s cottage in Co. Limerick and ultimate arrival at the forefront of Irish political life is well told in [this] sterling new biography by Ronan Fanning… You can’t argue with…the authority and conciseness of Ronan Fanning’s account.
-- Patricia Craig Times Literary Supplement


Reading these pages, it is hard to imagine any other Irish figure of the time having the subtlety and stature to face down Winston Churchill during the Second World War… Fanning’s marvelous book is more a political portrait than a conventional biography. It is sympathetic but not hagiographic.
-- Vincent Boland Financial Times


The beauty of this admirable, succinct biography of Dev by one of Ireland’s foremost historians is that he acknowledges all [the] charges [against De Valera], accepts the validity of some of them, and still presents us with a sympathetic account of the man… A rounded and brave take on this lanky, divisive, extraordinary figure: this biography is a feat.
-- Melanie McDonagh Independent [UK]


Unlike some of the earlier biographies of Éamon de Valera, Ronan Fanning seeks neither to deify nor demonise his subject. Instead he provides a lively account recognising his subject’s accomplishments and failures… This well-written and balanced biography is a lively and judicious account of the Long Fellow’s career.
-- Ryle Dwyer Irish Examiner


Dev, as befits one of our greatest statesmen, has been the subject of many books—some good, some less good, some bordering on hagiography, some seething with enmity. Fanning is not one for hasty judgments. His literary skills and his unerring grasp of the realities of politics make this one a convincing narrative and a joy to read.
-- James Downey Irish Independent


[A] compact but searching biography…Fanning is no simplistic apologist for his subject, but nor is he hostile toward him. This approach is more than usually valuable, for de Valera was a polarizing and controversial figure, and so a balanced assessment is especially welcome in assessing his decades-long political dominance…There are many surprises along the way, even for those readers well-informed on Irish history and politics…This biography makes a strong and ultimately convincing case for de Valera as the indispensable founding father of the sovereign Irish Republic we know today.
-- Martin Rubin Washington Times


The best biography yet of the Irish statesman, is a succinct, judicious treatment of the basic facts of his life, his ideas, the controversies he generated, and his place not just in Irish but also world history.
-- D. M. Cregier Choice