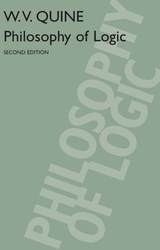 With his customary incisiveness, W. V. Quine presents logic as the product of two factors, truth and grammar—but argues against the doctrine that the logical truths are true because of grammar or language. Rather, in presenting a general theory of grammar and discussing the boundaries and possible extensions of logic, Quine argues that logic is not a mere matter of words.
TABLE OF CONTENTS