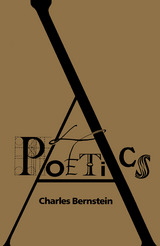 A Poetics
by Charles Bernstein
Harvard University Press, 1992
Paper: 978-0-674-67857-6
This rich collection is far more than an important work of criticism by an extraordinary poet; it is a poetic intervention into criticism. "Artifice of Absorption," a key essay, is written in verse, and its structures and rhythms initiate the reader into the strength and complexity of the argument. In a wild variety of topics, polemic, and styles, Bernstein surveys the current poetry scene and addresses many of the hot issues of poststructuralist literary theory. "Poetics is the continuation of poetry by other means," he writes. What role should poetics play in contemporary culture? Bernstein finds the answer in dissent, not merely in argument but in form-a poetic language that resists being easily absorbed into the conventions of our culture.

Insisting on the vital need for radical innovation, Bernstein traces the traditions of modern poetry back to Stein and Wilde, taking issue with those critics who see in the "postmodern" a loss of political and aesthetic relevance. Sometimes playful, often hortatory, always intense, he joins in the debate on cultural diversity and the definition of modernism. We encounter Swinburne and Morris as surprising precursors, along with considerations of Wittgenstein, Khlebnikov, Adorno, Jameson, and Pac-Man. A Poetics is both criticism and poetry, both tract and song, with no dull moments.

1. State of the Art
2. Artifice of Absorption
3. In the Middle of Modernism in the Middle of Capitalism on the Outskirts of New York
4. Time Out of Motion: Looking Ahead to See Backward
5. Pounding Fascism (Appropriating Ideologies- Mystification, Aestheticization, and Authority in Pound's Poetic Practice)
6. Play It Again, Pac-Man
7. Professing Stein / Stein Professing
8. Optimism and Critical Excess (Process)
9. Censers of the Unknown-Margins, Dissent, and the Poetic Horizon
10. The Second War and Postmodern Memory
11. Comedy and the Poetics of Political Form

Reviews of this book:
The pieces collected in A Poetics are remarkable not only for the ever-changing spin they put on language, but also for expanding our sense of the consequences of this rethinking of poetic form(s) in the broadest sense.
--Jan Plug, L'Esprit CrÃƒÂ©ateur

Charles Bernstein's critical prose is the extension of his increasingly important poetic oeuvre. In their theoretical sophistication, their radical formal construction, and, above all, their great boldness and originality, many of the essays in this book have already become underground classics, providing us with a roadmap for how to come to terms with the verbal/visual art and culture of our own time. Part manifesto, part critique, part stringent analysis, A Poetics carries on the tradition of Pound's ABC of Reading and Stein's Lectures in America.
--Marjorie Perloff, Stanford University
TABLE OF CONTENTS