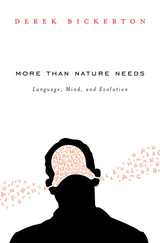 How did humans acquire cognitive capacities far more powerful than any hunting-and-gathering primate needed to survive? Alfred Russel Wallace, co-founder with Darwin of evolutionary theory, set humans outside normal evolution. Darwin thought use of language might have shaped our sophisticated brains, but this remained an intriguing guess--until now. Combining state-of-the-art research with forty years of writing and thinking about language origins, Derek Bickerton convincingly resolves a crucial problem that biology and the cognitive sciences have systematically avoided.

Before language or advanced cognition could be born, humans had to escape the prison of the here and now in which animal thinking and communication were both trapped. Then the brain's self-organization, triggered by words, assembled mechanisms that could link not only words but the concepts those words symbolized--a process that had to be under conscious control. Those mechanisms could be used equally for thinking and for talking, but the skeletal structures they produced were suboptimal for the hearer and had to be elaborated. Starting from humankind's remotest past, More than Nature Needs transcends nativist thesis and empiricist antithesis by presenting a revolutionary synthesis that shows specifically and in a principled way how and why the synthesis came about.
TABLE OF CONTENTS
Contents
1. Wallace's Problem
2. Generative Theory
3. The "Specialness" of Humans
4. From Animal Communication to Protolanguage
5. Universal Grammar
6. Variation and Change
7. Language "Acquisition"
8. Creolization
9. Homo Sapiens Loquens
References
Acknowledgments
Index