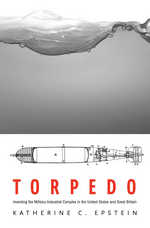 When President Eisenhower referred to the "military-industrial complex" in his 1961 Farewell Address, he summed up in a phrase the merger of government and industry that dominated the Cold War United States. In this bold reappraisal, Katherine Epstein uncovers the origins of the military-industrial complex in the decades preceding World War I, as the United States and Great Britain struggled to perfect a crucial new weapon: the self-propelled torpedo.

Torpedoes threatened to upend the delicate balance among the world's naval powers, they were bought and sold in a global marketplace, and they were cutting-edge industrial technologies. But building them required substantial capital investments and close collaboration among scientists, engineers, businessmen, and naval officers. To address these formidable challenges, the U.S. and British navies created a new procurement paradigm: instead of buying finished armaments from the private sector or developing them from scratch at public expense, they began to invest in private-sector research and development. The inventions emerging from torpedo R&D sparked legal battles over intellectual property rights that reshaped national security law.

Torpedo blends military, legal, and business history with the history of science and technology to recast our understanding of defense contracting and the demands of modern warfare.
TABLE OF CONTENTS
Contents
Introduction
1. America’s Weapons of the Weak
2. Britain’s Weapons of the Strong
3. The US Navy and the Emergence of Command Technology
4. The Royal Navy and the Quest for Reach
5. Command Technology on Trial in the United States
6. A Very Bad Gap in Britain
Conclusion
Abbreviations
Archival Sources
Notes
Acknowledgments
Index