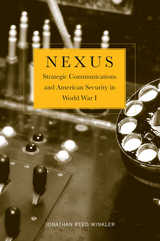 In an illuminating study that blends diplomatic, military, technology, and business history, Winkler shows how U.S. officials during World War I discovered the enormous value of global communications. In this absorbing history, Winkler sheds light on the early stages of the global infrastructure that helped launch the United States as the predominant power of the century.
TABLE OF CONTENTS