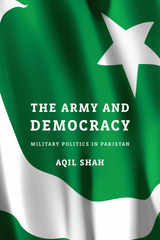 Since Pakistan gained independence in 1947, only once has an elected government completed its tenure and peacefully transferred power to another elected government. In sharp contrast to neighboring India, the Muslim nation has been ruled by its military for over three decades. Even when they were not directly in control of the government, the armed forces maintained a firm grip on national politics. How the military became Pakistan's foremost power elite and what its unchecked authority means for the future of this nuclear-armed nation are among the crucial questions Aqil Shah takes up in The Army and Democracy.

Pakistan's and India's armies inherited their organization, training, and doctrines from their British predecessor, along with an ethic that regarded politics as outside the military domain. But Pakistan's weak national solidarity, exacerbated by a mentality that saw war with India looming around every corner, empowered the military to take national security and ultimately government into its own hands. As the military's habit of disrupting the natural course of politics gained strength over time, it arrested the development of democratic institutions.

Based on archival materials, internal military documents, and over 100 interviews with politicians, civil servants, and Pakistani officers, including four service chiefs and three heads of the clandestine Inter-Services Intelligence, The Army and Democracy provides insight into the military's contentious relationship with Pakistan's civilian government. Shah identifies steps for reforming Pakistan's armed forces and reducing its interference in politics, and sees lessons for fragile democracies striving to bring the military under civilian control.

REVIEWS
[An] important new book…The military has hitherto escaped accountability because, as Aqil Shah explains in The Army and Democracy: Military Politics in Pakistan, it has always resisted democratic control. Shah traces its praetorian instincts to the seminal conflict over Kashmir, which set the tenor of the relations between military and civilian institutions…Shah is rightly scathing of the military’s role in politics.
-- Muhammad Idrees Ahmad The Nation


[This] rich and skillfully argued book leaves no doubt about the military’s central responsibility in blighting the course of Pakistan’s democratization. While some may see [Shah’s] approach as too forgiving of Pakistan's politicians, his is a fresh and original perspective that demands serious consideration.
-- Farzana Shaikh Times Higher Education


This book is a focused and timely analysis of what has gone badly wrong in Pakistan, and what could be done to correct the situation. It will hopefully inspire Pakistanis who care for their country—both inside and outside the armed forces—to reform their political order; otherwise extremist Islam will destroy their polity and convulse the region in violence.
-- Talmiz Ahmad Business Standard


There would not be a better time to read Professor Shah’s wonderfully nuanced, well-referenced and yet fast-paced book than after the recent almost two-month-long ‘civil–military coalition’ attempt to impose its will on an elected PM and parliament… Shah has excelled in showing that, since the fateful invasion of Kashmir in October 1947, the military has become increasingly politicized and distant, unlike the Indian army, from the professional apolitical ethos both had inherited from the British army… Shah gives a series of very timely policy prescriptions to balance the civil–military equation in favor of the former, making his work urgent reading for Pakistan watchers and Pakistani politicians alike.
-- Mohammad Taqi Daily Times


With a clarity and directness that is refreshing, The Army and Democracy attributes Pakistan’s lack of democratization to the military’s formal and informal political interventions, further suggesting that this has, on the balance, greatly impacted the state’s ability to effectively resolve the perennial problems of ethnic conflict, governance, and growth that have blighted Pakistan’s history…The Army and Democracy is arguably at its most interesting and informative when it details the socialization process that takes place within the military. Through his analysis of the military’s publications and training materials, as well as his interviews with military personnel, Shah provides a rare insight into the internal workings of the military mind…The Army and Democracy is an extremely accessible read that will undoubtedly be of great value to experts in the field as well as a more general audience.
-- Hassan Javid Dawn


Based on archival material and more than 100 interviews with politicians, civil servants and military officers, including four services chiefs and three heads of the Inter-Services Intelligence, and assessment of military writings, Shah’s book provides deep insight into the military mind… The Army and Democracy is a treasure trove of information on civil–military relations in Pakistan. It is also a lesson on what the country needs the most at this critical juncture—a politics of inclusion by all stakeholders, rather than exclusion.
-- Shahabuddin Gilani Express Tribune


The book makes for fine analysis but is a pessimistic read. The Pakistan army’s attitudes towards elected leaders, India, and citizens of Pakistan has not changed since it indulged in the first coup there. These assumptions go back almost to the start of the country’s independent life and have not changed since. Shah’s book, which was researched in recent years, is one more example that little has changed at the general headquarters in Rawalpindi.
-- Gayatri Chandrasekaran Mint


An excellent addition to the existing literature on the conflation of civil and military roles in the politics of Pakistan. The book uncovers many myths about the army and informs us about the strategic, political and social ramifications of the khaki adventures since the incursion in Kashmir in 1948 which sowed the seeds of military insubordination. The book is a result of rigorous research and a labor of love…Aqil Shah has authentically mapped Army’s institutional development, its professional and political expansion, and taking over of policy and consequently the society…The book…weaves an engaging narrative that fascinatingly tells the unique story of Pakistan’s military which has defied global trends of democratic waves…Whenever Pakistan Army decides to produce a new breed and generation of thinking officers, as against the current majority of believing officers, this book will be handy for a non-offensive unlearning.
-- Arshed Bhatti The News on Sunday


It not only helps understand the current crisis but also helps us see into the future… Shah shows that the Pakistan Army has always had the final say in running the country, whether they are in power or are running the country from behind the scenes. This serves to demonstrate that Pakistan Army’s hold on Pakistan is stronger than ever. This highly readable book is a must­-read for everyone who wants to know what went wrong with Pakistan and why… The best book on the subject.
-- Arif Jamal thewashingtonbookreview.com


Aside from providing a superb study of Pakistani civil–military relations, Shah makes an important and more general scholarly contribution: he explains why new polities fracture under challenging security environments and identifies the impulses that compel generals to both shift their gaze abroad and intervene in politics.
-- Zoltan Barany, author of The Soldier and the Changing State: Building Democratic Armies in Africa, Asia, Europe, and the Americas


Shah’s book stands tall among the few serious books on Pakistan and its army. Given Pakistan’s likely importance for the near future, it will be received warmly by both the policy community and anyone else interested in this critical region.
-- Stephen P. Cohen, author of Shooting for a Century: The India-Pakistan Conundrum


A remarkable exploration of the role of the Pakistani army in politics since 1947. Shah brilliantly exposes the porousness of, and the connivance between, the nation’s civilian and military spheres. He shows that the army was not the sole villain of the play: domestic politicians and American backers have played key roles in making military rule possible.
-- Christophe Jaffrelot, author of The Pakistan Paradox: Instability and Resilience