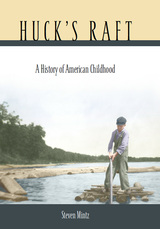 Like Huck's raft, the experience of American childhood has been both adventurous and terrifying. For more than three centuries, adults have agonized over raising children while children have followed their own paths to development and expression. Now, Steven Mintz gives us the first comprehensive history of American childhood encompassing both the child's and the adult's tumultuous early years of life.

Underscoring diversity through time and across regions, Mintz traces the transformation of children from the sinful creatures perceived by Puritans to the productive workers of nineteenth-century farms and factories, from the cosseted cherubs of the Victorian era to the confident consumers of our own. He explores their role in revolutionary upheaval, westward expansion, industrial growth, wartime mobilization, and the modern welfare state. Revealing the harsh realities of children's lives through history—the rigors of physical labor, the fear of chronic ailments, the heartbreak of premature death—he also acknowledges the freedom children once possessed to discover their world as well as themselves.

Whether at work or play, at home or school, the transition from childhood to adulthood has required generations of Americans to tackle tremendously difficult challenges. Today, adults impose ever-increasing demands on the young for self-discipline, cognitive development, and academic achievement, even as the influence of the mass media and consumer culture has grown. With a nod to the past, Mintz revisits an alternative to the goal-driven realities of contemporary childhood. An odyssey of psychological self-discovery and growth, this book suggests a vision of childhood that embraces risk and freedom—like the daring adventure on Huck's raft.