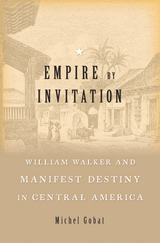 Michel Gobat traces the untold story of the rise and fall of the first U.S. overseas empire to William Walker, a believer in the nation’s manifest destiny to spread its blessings not only westward but abroad as well.

In the 1850s Walker and a small group of U.S. expansionists migrated to Nicaragua determined to forge a tropical “empire of liberty.” His quest to free Central American masses from allegedly despotic elites initially enjoyed strong local support from liberal Nicaraguans who hoped U.S.-style democracy and progress would spread across the land. As Walker’s group of “filibusters” proceeded to help Nicaraguans battle the ruling conservatives, their seizure of power electrified the U.S. public and attracted some 12,000 colonists, including moral reformers. But what began with promises of liberation devolved into a reign of terror. After two years, Walker was driven out.

Nicaraguans’ initial embrace of Walker complicates assumptions about U.S. imperialism. Empire by Invitation refuses to place Walker among American slaveholders who sought to extend human bondage southward. Instead, Walker and his followers, most of whom were Northerners, must be understood as liberals and democracy promoters. Their ambition was to establish a democratic state by force. Much like their successors in liberal-internationalist and neoconservative foreign policy circles a century later in Washington, D.C., Walker and his fellow imperialists inspired a global anti-U.S. backlash. Fear of a “northern colossus” precipitated a hemispheric alliance against the United States and gave birth to the idea of Latin America.
REVIEWS
Empire by Invitation is a wonderfully subversive work of history. It takes an iconic story of American racism and imperialism and, through dogged transnational research and bold analysis, reveals it to be something altogether weirder, more interesting, and more important. A fabulous book.', Brian DeLay, author of War of a Thousand Deserts 'This important and richly researched book reinterprets the politics and ideas not only of Walker and his gang of ‘filibusters,’ but also the Nicaraguan liberals and foreign supporters who sought to construct a new liberal polity along the route of a booming passageway across the Central American isthmus. Gobat recasts a familiar episode in a new and surprising light—it is global and transnational history at its best.', Jay Sexton, author of The Monroe Doctrine: Empire and Nation in Nineteenth-Century America 'Gobat busts the conventional wisdom on William Walker’s 1855 conquest of Nicaragua wide open, making a compelling case for the Walker regime as an example of liberal imperialism. This engrossing book makes a major contribution to our understanding of empire in the Manifest Destiny era.', Kristin L. Hoganson, author of Fighting for American Manhood
TABLE OF CONTENTS
Cover
Title Page
Copyright
Dedication
Contents
Introduction
1. “The Apple in Our Eden”
2. Inviting the Filibusters
3. “Walker Is the United States”
4. The Colonists
5. Imagined Empire
6. Creating a Filibuster State
7. The Promise of Development
8. Filibuster Revolution
9. The Fall
Epilogue
Abbreviations
Notes
Acknowledgments
Index