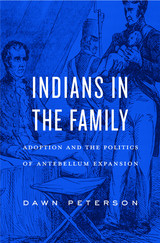 Through stories of a dozen white adopters, adopted Indian children, and their Native parents in early America, Dawn Peterson shows the role adoption and assimilation played in efforts to subdue Native peoples. As adults, adoptees used their education to thwart U.S. claims to their homelands, setting the stage for the Indian Removal Act of 1830.