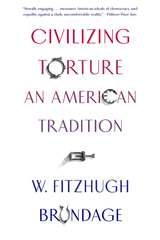 “A sobering history of how American communities and institutions have relied on torture in various forms since before the United States was founded.”
—Los Angeles Times

“That Americans as a people and a nation-state are violent is indisputable. That we are also torturers, domestically and internationally, is not so well established. The myth that we are not torturers will persist, but Civilizing Torture will remain a powerful antidote in confronting it.”
—Lawrence Wilkerson, former Chief of Staff to Secretary of State Colin Powell

“Remarkable…A searing analysis of America’s past that helps make sense of its bewildering present.”
—David Garland, author of Peculiar Institution

Most Americans believe that a civilized state does not torture, but that belief has repeatedly been challenged in moments of crisis at home and abroad. From the Indian wars to Vietnam, from police interrogation to the War on Terror, US institutions have proven far more amenable to torture than the nation’s commitment to liberty would suggest.

Civilizing Torture traces the history of debates about the efficacy of torture and reveals a recurring struggle to decide what limits to impose on the power of the state. At a time of escalating rhetoric aimed at cleansing the nation of the undeserving and an erosion of limits on military power, the debate over torture remains critical and unresolved.
TABLE OF CONTENTS
Cover
Title Page
Copyright
Dedication
Contents
Introduction. A Question of Civilization
1. The Manners of Barbarians
2. Discipline in a Young Democracy
3. Cruelty and the Paradox of Slave Property
4. Torture in the Brothers’ War
5. Imperialist Excesses
6. Police Station Trespasses
7. Cold War Brutality
8. The Enemy Within
Notes
Acknowledgments
Illustration Credits
Index