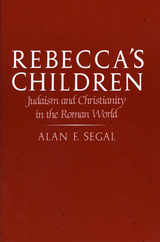 Renowned scholar Alan F. Segal offers startlingly new insights into the origins of rabbinic Judaism and Christianity. These twin descendants of Hebrew heritage shared the same social, cultural, and ideological context, as well as the same minority status, in the first century of the common era.

Through skillful application of social science theories to ancient Western thought, including Judaism, Hellenism, early Christianity, and a host of other sectarian beliefs, Segal reinterprets some of the most important events of Jewish and Christian life in the Roman world. For example, he finds:
That the concept of myth, as it related to covenant, was a central force of Jewish life. The Torah was the embodiment of covenant both for Jews living in exile and for the Jewish community in Israel.
That the Torah legitimated all native institutions at the time of Jesus, even though the Temple, Sanhedrin, and Synagogue, as well as the concepts of messiah and resurrection, were profoundly affected by Hellenism. Both rabbinic Judaism and Christianity necessarily relied on the Torah to authenticate their claim on Jewish life.
That the unique cohesion of early Christianity, assuring its phenomenal success in the Hellenistic world, was assisted by the Jewish practices of apocalypticism, conversion, and rejection of civic ritual.
That the concept of acculturation clarifies the Maccabean revolt, the rise of Christianity, and the emergence of rabbinic Judaism.
That contemporary models of revolution point to the place of Jesus as a radical.
That early rabbinism grew out of the attempts of middle-class Pharisees to reach a higher sacred status in Judea while at the same time maintaining their cohesion through ritual purity.
That the dispute between Judaism and Christianity reflects a class conflict over the meaning of covenant.
The rising turmoil between Jews and Christians affected the development of both rabbinic Judaism and Christianity, as each tried to preserve the partly destroyed culture of Judea by becoming a religion. Both attempted to take the best of Judean and Hellenistic society without giving up the essential aspects of Israelite life. Both spiritualized old national symbols of the covenant and practices that consolidated power after the disastrous wars with Rome. The separation between Judaism and Christianity, sealed in magic, monotheism, law, and universalism, fractured what remained of the shared symbolic life of Judea, leaving Judaism and Christianity to fulfill the biblical demands of their god in entirely different ways.