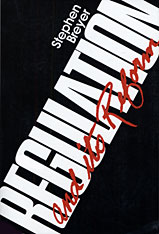 This book will become the bible of regulatory reform. No broad, authoritative treatment of the subject has been available for many years except for Alfred Kahn's Economics of Regulation (197O). And Stephen Breyer's book is not merely a utilitarian analysis or a legal discussion of procedures; it employs the widest possible perspective to survey the full implications of government regulation—economic, legal, administrative, political—while addressing the complex problems of administering regulatory agencies.

Only a scholar with Judge Breyer's practical experience as chief counsel to the Senate Judiciary Committee could have accomplished this task. He develops an ingenious original system for classifying regulatory activities according to the kinds of problems that have called for, or have seemed to call for, regulation; he then examines how well or poorly various regulatory regimes remedy these market defects. This enables him to organize an enormous amount of material in a coherent way, and to make significant and useful generalizations about real-world problems.

Among the regulatory areas he considers are health and safety; environmental pollution, trucking, airlines, natural gas, public utilities, and telecommunications. He further gives attention to related topics such as cost-of-service ratemaking, safety standards, antitrust, and property rights. Clearly this is a book whose time is here—a veritable how-to-do-it book for administration deregulators, legislators, and the judiciary; and because it is comprehensive and superbly organized, with a wealth of highly detailed examples, it is practical for use in law schools and in courses on economics and political science.
TABLE OF CONTENTS