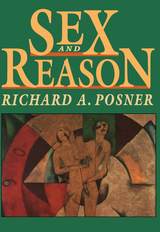 Sexual drives are rooted in biology, but we don't act on them blindly. Indeed, as the eminently readable judge and legal scholar Richard Posner shows, we make quite rational choices about sex, based on the costs and benefits perceived.

Part One: The History of Sexuality

1. Theoretical Sexology
The Development of the Field
Social Constructionism (with a Glance at Gender Disorders)
Other Threads in the Multidisciplinary Tapestry
2. Autres Temps, Autres Moeurs
The History of Western Sexual Mores
The Sexual Mores of Non-Western Cultures
3. Sexuality and Law

Part Two: A Theory of Sexuality

4. The Biology of Sex
The Biological Basis and Character of "Normal" Sex
The Biology of "Deviant" Sex
Conclusion and Critique
5. Sex and Rationality
The Benefits of Sex
The Costs of Sex
Complementarity of Sexual Practices
6. The History of Sexuality from the Perspective of Economics
Greek Love and the Institutionalization of Pederasty
Monasticism, Puritanism, and Christian Sex Ethics
Swedish Permissiveness
Three Stages in the Evolution of Sexual Morality
7. Optimal Regulation of Sexuality
The Model of Morally Indifferent Sex Elaborated
The Externalities of Sex
Incest and Revulsion
The Efficacy of Sexual Regulations
Designing an Optimal Punishment Scheme for Sex Crimes
The Political Economy of Sexual Regulation
8. Moral Theories of Sexuality
Are Moral Theories Falsifiable?
Christian and Liberal Theories of Sex
Sexual Radicals

Part Three: The Regulation of Sexuality

Reviews of this book:
[Posner] is one of the most distinguished and prolific legal thinkers of his generation [and this is an] extraordinary book...Like [George Bernard] Shaw, he combines a passion for exposing humbug and pseudo-profundity with an odd but genuine sort of social compassion, a delight in shocking the self-righteous with a love of human diversity and freedom...We will remember, and profit by, the wit and the courage of his attacks on bigotry, folly, and cruelty.
--Martha C. Nussbaum, New Republic