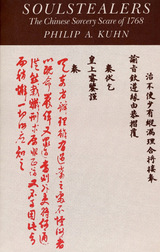 Midway through the reign of the Ch'ien-lung emperor, Hungli, mass hysteria broke out among the common people. It was feared that sorcerers were roaming the land, clipping off the ends of men's queues (the braids worn by royal decree) and chanting magical incantations over them in order to steal the souls of their owners. In a fascinating chronicle of this epidemic of fear and the official prosecution of soulstealers that ensued, Philip Kuhn opens a window on the world of eighteenth-century China.
TABLE OF CONTENTS
Contents
1. Tales of the China Clipper
2. The Prosperous Age
3. Threats Seen and Unseen
4. The Crime Defined
5 The Roots of Sorcery Fear
6. The Campaign in the Provinces
7. On the Trail of the Master-Sorcerers
8. The End of the Trail
9. Political Crime and Bureaucratic Monarchy
10. Theme and Variations
Notes
Bibliography
Glossary
Index