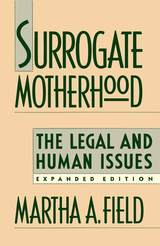 A practice known since biblical times, surrogate motherhood has only recently leaped to prominence as a way of providing babies for childless couples--and leaped to notoriety through the dramatic case of Baby M. Contract surrogacy is officially little more than ten years old, but by 1986 five hundred babies had been born to mothers who gave them up to sperm donor fathers for a fee, and the practice is growing rapidly. Martha Field examines the myriad legal complexities that today enmesh surrogate motherhood, and also looks beyond existing legal rules to ask what society wants from surrogacy.

A man's desire to be a "biological" parent even when his wife is infertile-the father's wife usually adopts the child-has led to this new kind of family, and modern technology could further extend surrogacy's appeal by making gestational surrogates available to couples who provide both egg and sperm. But is surrogacy a form of babyselling? Is the practice a private matter covered by contract law, or does adoption law govern? Is it good or bad social and public policy to leave surrogacy unregulated? Should the law allow, encourage, discourage, or prohibit surrogate motherhood? Ultimately the answers will depend on what the American public wants.

In the difficult process of sorting out such vexing questions, Martha Field has written a landmark book. Showing that the problem is rather too much applicable law than too little, she discusses contract law and constitutional law, custody and adoption law, and the rights of biological fathers as well as the laws governing sperm donation. Competing values are involved all along the legal and social spectrum. Field suggests that a federal prohibition would be most effective if banning surrogacy is the aim, but federal prohibition might not be chosen for a variety of reasons: a preference for regulating surrogacy instead of driving it underground; a preference for allowing regulation and variation by state; or a respect for the interests of people who want to enter surrogacy arrangements. Since the law can support a wide variety of positions, Field offers one that seems best to reconcile the competing values at stake. Whether or not paid surrogacy is made illegal, she suggests that a surrogate mother retain the option of abiding by or canceling the contract up to the time she freely gives the child to the adopting couple. And if she cancels the contract, she should be entitled to custody without having to prove in court that she would be a better parent than the father.
TABLE OF CONTENTS