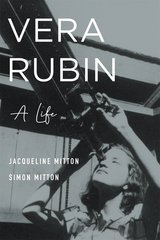 A Physics Today Best Book of the Year

The first biography of a pioneering scientist who made significant contributions to our understanding of dark matter and championed the advancement of women in science.

One of the great lingering mysteries of the universe is dark matter. Scientists are not sure what it is, but most believe it’s out there, and in abundance. The astronomer who finally convinced many of them was Vera Rubin. When Rubin died in 2016, she was regarded as one of the most influential astronomers of her era. Her research on the rotation of spiral galaxies was groundbreaking, and her observations contributed significantly to the confirmation of dark matter, a most notable achievement.

In Vera Rubin: A Life, prolific science writers Jacqueline Mitton and Simon Mitton provide a detailed, accessible overview of Rubin’s work, showing how she leveraged immense curiosity, profound intelligence, and novel technologies to help transform our understanding of the cosmos. But Rubin’s impact was not limited to her contributions to scientific knowledge. She also helped to transform scientific practice by promoting the careers of women researchers. Not content to be an inspiration, Rubin was a mentor and a champion. She advocated for hiring women faculty, inviting women speakers to major conferences, and honoring women with awards that were historically the exclusive province of men.

Rubin’s papers and correspondence yield vivid insights into her life and work, as she faced down gender discrimination and met the demands of family and research throughout a long and influential career. Deftly written, with both scientific experts and general readers in mind, Vera Rubin is a portrait of a woman with insatiable curiosity about the universe who never stopped asking questions and encouraging other women to do the same.

REVIEWS
Despite her importance, no other biography exists of Vera Rubin…Rubin is a fascinating character, not only for her great scientific achievements but for the example she set in how to tackle gender inequality in science…This is a great introduction to an important woman and her work.
-- Emily Winterburn BBC Sky at Night


A vivid biography of [a] trailblazing astronomer…The [Mittons] present an accessible and concise history of modern astrophysics alongside the biography, which brims with insight into Rubin’s commitment to getting more women into astronomy and her deep fascination with the mysteries of the universe. Stargazers will be delighted by this spirited account.
-- Publishers Weekly (starred review)


A thoughtful and nuanced chronicle of the famed astronomer’s life that neither overinflates nor diminishes the importance of her contributions…[A] remarkable portrait…[The Mittons] frame her story within a longer history of humanity’s study of galaxies, offering readers a fresh perspective on the history of astronomy in the 20th century.
-- Joanna Behrman Science


Wonderful…An excellent portrayal of the life and science of this remarkable scientist—a trailblazing astronomer, a true mentor and role model to generations of scientists, a tireless champion of women in science, and a kind and caring human being…The reader will be moved, inspired and motivated, and learn about the exciting research carried out at the time, from galaxies to cosmic expansion, large-scale structure of the Universe, rotation curves and dark matter…Illustrates why Vera was loved by all who knew her.
-- Neta A. Bahcall Nature Astronomy


[An] admirable biography…The Mittons rightly spotlight Rubin’s contributions to modern astronomy…Rubin’s research provided the groundbreaking evidence for one of the abiding mysteries of modern cosmology, while her activism and her exemplary life helped reshape the social fabric of the academic discipline she loved so well.
-- Laurence A. Marschall Natural History


In this first ever biography of Rubin, Jacqueline Mitton and Simon Mitton draw from Rubin's correspondence and papers to describe both her groundbreaking research and her activism for women researchers, capturing a portrait of a woman driven by a deep desire to learn more about the universe.
-- A Mighty Girl


By far the most comprehensive review of Vera Rubin’s career and all the factors that shaped it. A must read.
-- Sandra Faber, astronomer and University Professor, University of California Observatories


In this enchanting and engaging biography, Jacqueline and Simon Mitton have captured Vera Rubin’s exceptional life, unconventional career trajectory, and enduring scientific legacy. Rubin was an inspiring astronomer and human being whom I had the privilege of meeting and getting to know early in my career. This celebration of her work and life is most welcome and timely.
-- Priyamvada Natarajan, astrophysicist and author of Mapping the Heavens


This book is fascinating. We see Vera Rubin navigate a varied set of circumstances—in her family, in society, and in the scientific community—which culminated in a US National Observatory being named after her. It’s a story that will keep you reading, eagerly, to the last page.
-- Jay Pasachoff, astronomer and coauthor of The Cosmos: Astronomy in the New Millennium


I will never forget the friendly, reassuring presence of Vera Rubin in the front row at my first presentation for the American Astronomical Society, when I was a graduate student. This superb book brings alive her grace and relentless study of the rotation curves of galaxies, as well as her push for women to succeed and excel in astronomy and astrophysics. This book firmly cements Rubin’s place within the history of astronomy.
-- Carolyn Collins Petersen, author of The Discovery of the Universe


Rubin’s life story is one of perseverance in the face of occupational and societal obstacles. As the Mittons’ meticulous account of Rubin’s career arc demonstrates, no single breakthrough vaulted her to prominence…Astronomy enthusiasts will enjoy the book’s behind-the-scenes peeks into the profession.
-- Alan Hirshfeld Physics Today


A very thorough and expertly written book…The Mittons’ biography will be a key reference for researchers working on [Rubin] and other female astronomers in the future. It will also offer great insight for anybody interested in the history of cosmology during the twentieth century. I highly recommend it.
-- Jörg Matthias Determann Isis


A detailed and insightful biography of the woman who made such a momentous impact on our understanding of the Universe.
-- David G. Turner Journal of the Royal Astronomical Society of Canada

TABLE OF CONTENTS
Cover
Title Page
Copyright
Dedication
Contents
Foreword
Introduction
1. The Lure of the Stars
2. An Aspiring Astronomer
3. Cornell and the Rotating Universe
4. Georgetown, Gamow, and Galaxies
5. A Professional Astronomer at Last
6. The Call of the Dome
7. The Delight of Discovery
8. Adventures in Andromeda
9. Bright Light on Dark Matter
10. The Dynamic Universe
11. Speaking Out for Women
12. Wonderful Life
Appendix: Awards, Honors, and Appointments
Notes
Acknowledgments
Index