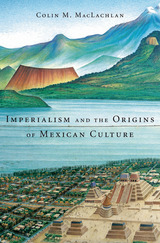 Their empire unmatched in military and cultural might, the Aztecs were poised on the brink of a golden age, when the arrival of the Spanish changed everything. Colin MacLachlan explains why Mexico is culturally Mestizo while ethnically Indian and why Mexicans remain orphaned from their indigenous heritage—the adopted children of European history.
TABLE OF CONTENTS
Contents
Prologue
Introduction
1. Mesoamerican Civilizations: The Evolution of Mesoamerica
2. The Formation of Euro-Spanish Culture: Iberia Enters History
3. Moors and Christians: A Fateful Encounter
4. Creating Mestizo Mexico: The Philosophical Challenge of America
Conclusion
Notes
Bibliography
Acknowledgments
Index