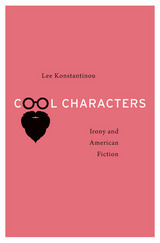 Lee Konstantinou examines irony in American literary and political life, showing how it migrated from the countercultural margins of the 1950s to the 1980s mainstream. Along the way, irony was absorbed into postmodern theory and ultimately become a target of recent writers who have moved beyond its limitations with a practice of “postirony.”