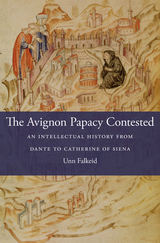 The Avignon papacy (1309–1377) represented the zenith of papal power in Europe. The Roman curia’s move to southern France enlarged its bureaucracy, centralized its authority, and initiated closer contact with secular institutions. The pope’s presence also attracted leading minds to Avignon, transforming a modest city into a cosmopolitan center of learning. But a crisis of legitimacy was brewing among leading thinkers of the day. The Avignon Papacy Contested considers the work of six fourteenth-century writers who waged literary war against the Catholic Church’s increasing claims of supremacy over secular rulers—a conflict that engaged contemporary critics from every corner of Europe.

Unn Falkeid uncovers the dispute’s origins in Dante’s Paradiso and Monarchia, where she identifies a sophisticated argument for the separation of church and state. In Petrarch’s writings she traces growing concern about papal authority, precipitated by the curia’s exile from Rome. Marsilius of Padua’s theory of citizen agency indicates a resistance to the pope’s encroaching power, which finds richer expression in William of Ockham’s philosophy of individual liberty. Both men were branded as heretics. The mystical writings of Birgitta of Sweden and Catherine of Siena, in Falkeid’s reading, contain cloaked confrontations over papal ethics and church governance even though these women were later canonized.

While each of the six writers responded creatively to the implications of the Avignon papacy, they shared a concern for the breakdown of secular order implied by the expansion of papal power and a willingness to speak their minds.

REVIEWS
Falkeid’s book is a welcome addition to the history of the political and intellectual climate of Europe in the fourteenth century.
-- New Criterion


In this fine work, Unn Falkeid illuminates the study of the fourteenth century and the Avignon papacy by bringing together the work and thought of six thinkers rarely seen side by side: Dante, Marsilius of Padua, William of Ockham, Petrarch, Birgitta of Sweden, and Catherine of Siena. With firm command of their written work, a lively sense of that period’s troubled political life, and a sharp instinct for the mot juste, Falkeid shows that those thinkers share a kind of unity that in prior scholarship went unremarked. In doing so, she also makes an important point: in pre-modern western history, ‘political thought’ can be found in a range of sources far wider than traditionally assumed.
-- Christopher Celenza, author of Machiavelli: A Portrait


In this intellectually ambitious book, Falkeid demonstrates quite well how the development of the Avignon papacy created a disconcerting yet fertile environment that forced many of the smartest people in Europe at the time to confront new issues and strike out in new directions. A fine piece of scholarship.
-- George W. Dameron, author of Florence and Its Church in the Age of Dante


The Avignon Papacy Contested is an impressive study by a sensitive reader of fourteenth-century history, literature, and theological controversy. Falkeid moves effortlessly across disciplines to tell a story of intense debates and disagreements that made themselves felt in seemingly every corner of Europe, especially Italy.
-- Jane Tylus, author of Siena, City of Secrets


Deserves to be read by all scholars interested in late medieval political thought and the history of the Avignon papacy. [Falkeid] provides a fresh way of looking at the fourteenth-century treatment of issues of papal claims to power.
-- Joseph Canning Journal of Ecclesiastical History

TABLE OF CONTENTS
Cover
Contents
Introduction
1. The Eagle’s Flight: Dante’s Paradiso VI and the Monarchia
2. Marsilius of Padua and the Question of Legitimacy
3. Individual Freedom in William of Ockham’s Breviloquium
4. Petrarch, Cola di Rienzo, and the Battle of Rome
5. The Prophetic Widow: Birgitta of Sweden and the Revelaciones
6. Catherine of Siena and the Mystical Body of the Church
Conclusion
Chronology
Notes
Bibliography
Acknowledgments
Index