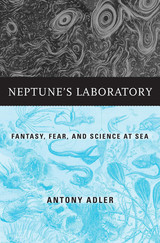 An eyewitness to profound change affecting marine environments on the Newfoundland coast, Antony Adler argues that the history of our relationship with the ocean lies as much in what we imagine as in what we discover.

We have long been fascinated with the oceans, seeking “to pierce the profundity” of their depths. In studying the history of marine science, we also learn about ourselves. Neptune’s Laboratory explores the ways in which scientists, politicians, and the public have invoked ocean environments in imagining the fate of humanity and of the planet—conjuring ideal-world fantasies alongside fears of our species’ weakness and ultimate demise.

Oceans gained new prominence in the public imagination in the early nineteenth century as scientists plumbed the depths and marine fisheries were industrialized. Concerns that fish stocks could be exhausted soon emerged. In Europe these fears gave rise to internationalist aspirations, as scientists sought to conduct research on an oceanwide scale and nations worked together to protect their fisheries. The internationalist program for marine research waned during World War I, only to be revived in the interwar period and again in the 1960s. During the Cold War, oceans were variously recast as battlefields, post-apocalyptic living spaces, and utopian frontiers.

The ocean today has become a site of continuous observation and experiment, as probes ride the ocean currents and autonomous and remotely operated vehicles peer into the abyss. Embracing our fears, fantasies, and scientific investigations, Antony Adler tells the story of our relationship with the seas.

REVIEWS
In his entertaining, readable history of marine science, [Adler] shows how humanity’s fundamental ignorance about the sea has often fed fantastical ideas of it as savior, battlefield, playground, storehouse, angry beast or hapless victim…Left me with a sense of urgency about the ocean’s perilous state…Enlightening.
-- Boris Worm Nature


The best narrative of oceanography’s history that I have ever read, Neptune’s Laboratory elucidates humanity’s relationship with the ocean. Compelling, imaginative, and exceptionally well researched, this book will make a difference in the world by offering insight into the fears and fantasies that forged our understandings of the ocean in the past and how, against mounting environmental challenges, they continue to shape our courses of action.
-- Helen Rozwadowski, author of Vast Expanses: A History of the Oceans


A social and cultural history of how Western societies have, over the last two hundred years, conceptualized the oceans as a place that can be scientifically understood…Thoughtful and well conceived. It communicates a changing understanding and imagining of the oceans… While of obvious interest to scholars of the ‘oceanic turn,’ it should also find a much broader audience among those interested in how the public interacts with science and with the environment, and how these interests feed and are fed by political goals and fears.
-- Penelope K. Hardy British Journal for the History of Science


Neptune’s Laboratory is a major accomplishment. Adler contributes penetrating new insights into marine research and technology from the last two centuries, and examines how that scholarship has shaped scientists’ hopes and fears for the future. The result is a sophisticated, evocative, and highly original approach to subject matter that challenges easy analysis.
-- Eric Mills, author of The Fluid Envelope of Our Planet: How the Study of Ocean Currents Became a Science


This book presents a remarkable account of the imagined futures that scientists, politicians, explorers, and mariners built around marine environments over two centuries. Taking us through the history of marine sciences from the nineteenth century to the present, Adler argues for a picture of oceanography that takes seriously practice, context, and a profound human engagement with the oceans. Neptune’s Laboratory will appeal to anyone interested in the history of the future.
-- Simon Werrett, author of Thrifty Science: Making the Most of Materials in the History of Experiment


An engaging new book about the history of humanity’s relationship with, and improving understanding of, the ocean…Neptune’s Laboratory is not only about the history of modern marine science but also about how we perceive the ocean—and how that perception has changed over time.
-- David Shiffman Issues in Science and Technology

TABLE OF CONTENTS
Cover
Title Page
Copyright
Dedication
Contents
Introduction
1. Discovering Wonder in the Deep
2. Marine Science for the Nation or for the World?
3. Scientific Internationalism in a Pacific World
4. Cold War Science on the Seafloor
5. Ocean Science and Governance in the Anthropocene
Conclusion
Notes
Acknowledgments
Index