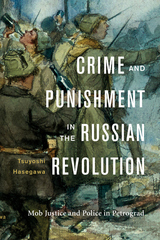 Russians from all walks of life joyously celebrated the end of Nicholas II’s monarchy, but one year later, amid widespread civil strife and lawlessness, a fearful citizenry stayed out of sight. Tsuyoshi Hasegawa offers a new perspective on Russia’s revolutionary year through the lens of violent crime and its devastating effect on ordinary people.
TABLE OF CONTENTS
Cover
Title Page
Copyright
Dedication
Epigraph
Contents
Note on Calendar and Transliteration
Introduction
1. Prelude to Revolution
2. Crime on the Rise
3. Why Did the Crime Rate Shoot Up?
4. Militias Rise and Fall
5. An Epidemic of Mob Justice
6. Crime after the Bolshevik Takeover
7. The Bolsheviks and the Militia
Conclusion
Abbreviations
Notes
Bibliography
Acknowledgments
Index