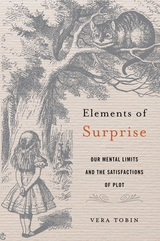 Why do some surprises delight—the endings of Agatha Christie novels, films like The Sixth Sense, the flash awareness that Pip’s benefactor is not (and never was!) Miss Havisham? Writing at the intersection of cognitive science and narrative pleasure, Vera Tobin explains how our brains conspire with stories to produce those revelatory plots that define a “well-made surprise.”

By tracing the prevalence of surprise endings in both literary fiction and popular literature and showing how they exploit our mental limits, Tobin upends two common beliefs. The first is cognitive science’s tendency to consider biases a form of moral weakness and failure. The second is certain critics’ presumption that surprise endings are mere shallow gimmicks. The latter is simply not true, and the former tells at best half the story. Tobin shows that building a good plot twist is a complex art that reflects a sophisticated understanding of the human mind.

Reading classic, popular, and obscure literature alongside the latest research in cognitive science, Tobin argues that a good surprise works by taking advantage of our mental limits. Elements of Surprise describes how cognitive biases, mental shortcuts, and quirks of memory conspire with stories to produce wondrous illusions, and also provides a sophisticated how-to guide for writers. In Tobin’s hands, the interactions of plot and cognition reveal the interdependencies of surprise, sympathy, and sense-making. The result is a new appreciation of the pleasures of being had.

REVIEWS
[An] excellent book…Tobin reveals valuable truths about the stories we tell to entertain each other, and those we tell ourselves to get by, and how they are related.
-- Simon Ings New Scientist


Plot twists can jolt us into an understanding of fiction’s deeper meaning. But how do they work?…Tobin pinpoints the psychological quirks that make us vulnerable to literary shock tactics.
-- Barbara Kiser Nature


In Elements of Surprise, John le Carré rubs shoulders with Agatha Christie, Jane Austen with Graham Greene, in a wide-ranging analysis of a trope and practice that moves across all genres… Tobin’s careful analysis of the mechanics of ‘surprise’ fully mobilizes the cognitive sciences as provocative and valuable literary critical tools… Elements of Surprise is a fascinating analysis of an element of plot that we might just take too much for granted.
-- Gail Marshall Times Higher Education


[Tobin] looks at our cognitive limits and quirks that not only help make such surprises work effectively but also elicit a certain kind of pleasure and satisfaction when revealed, recognized, understood, and acknowledged. She looks methodically under the hoods of various cognitive theories of memory, perception, and narrative linguistics…The book should be read by writers who want to improve their craft and readers/viewers who want to understand their own responses to such narratives…The better we understand what makes certain features of a narrative work well, the more it can deepen both our reading and writing enjoyment.
-- Jenny Bhatt PopMatters


This book is likely to be the defining standard book in cognitive literary studies for at least the next decade.
-- Blakey Vermeule, Stanford University


This is a work of major importance, perhaps the best one yet on the psychology of narrative and on what narrative can offer psychology. It is a pleasure to read and a pleasure to learn from.
-- William Flesch, author of Comeuppance: Costly Signaling, Altruistic Punishment, and Other Biological Components of Fiction


If you want to know how good literary writers are manipulating your mind as a reader—read Tobin. This is a remarkable book.
-- Eve Sweetser, University of California, Berkeley


What makes a plot, fictitious or real, satisfying? With enthralling style, Tobin uncovers ways in which satisfaction depends upon fundamental processes of thinking about other minds, especially minds telling us stories. Welcome to the cognitive science of sophisticated mental pleasure. A masterpiece.
-- Mark Turner, Case Western Reserve University


In this eloquent and masterful work, Tobin guides us to think differently about the stories we require to make sense of our lives.
-- Amy Cook, author of Shakespearean Neuroplay: Reinvigorating the Study of Dramatic Texts and Performance through Cognitive Science

TABLE OF CONTENTS
Cover
Title Page
Copyright
Dedication
Contents
Introduction
1. Elementary Problems
2. The Curse of Knowledge?
3. The Poetics of Surprise
4. The Naming of Things
5. Revelations, Recognitions, and the Satisfactions of Plot
6. When Unreliability Is a Surprise
7. When Narration Itself Is a Surprise
8. So Many Things Are Obvious (Now That We’re at the End)
Notes
References
Acknowledgments
Index