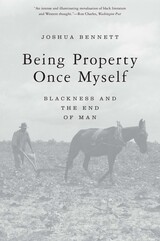 “This trenchant work of literary criticism examines the complex ways…African American authors have written about animals. In Bennett’s analysis, Richard Wright, Toni Morrison, Jesmyn Ward, and others subvert the racist comparisons that have ‘been used against them as a tool of derision and denigration.’...An intense and illuminating reevaluation of black literature and Western thought.”
—Ron Charles, Washington Post

For much of American history, Black people have been conceived and legally defined as nonpersons, a subgenre of the human. In Being Property Once Myself, prize-winning poet Joshua Bennett shows that Blackness has long acted as the caesura between human and nonhuman and delves into the literary imagination and ethical concerns that have emerged from this experience. Each chapter tracks a specific animal—the rat, the cock, the mule, the dog, the shark—in the works of Richard Wright, Toni Morrison, Zora Neale Hurston, Jesmyn Ward, and Robert Hayden. The plantation, the wilderness, the kitchenette overrun with pests, the valuation and sale of animals and enslaved people—all place Black and animal life in fraught proximity.

Bennett suggests that animals are deployed to assert a theory of Black sociality and to combat dominant claims about the limits of personhood. And he turns to the Black radical tradition to challenge the pervasiveness of anti-Blackness in discourses surrounding the environment and animals. Being Property Once Myself is an incisive work of literary criticism and a groundbreaking articulation of undertheorized notions of dehumanization and the Anthropocene.

“A gripping work…Bennett’s lyrical lilt in his sharp analyses makes for a thorough yet accessible read.”
—LSE Review of Books

“These absorbing, deeply moving pages bring to life a newly reclaimed ethics.”
—Colin Dayan, author of The Law Is a White Dog

REVIEWS
This trenchant work of literary criticism examines the complex ways 20th- and 21st-century African American authors have written about animals. In Bennett’s analysis, Richard Wright, Toni Morrison, Jesmyn Ward, and others subvert the racist comparisons that have ‘been used against them as a tool of derision and denigration.’…An intense and illuminating reevaluation of black literature and Western thought.
-- Ron Charles Washington Post


A gripping work…Bennett’s lyrical lilt in his sharp analyses makes for a thorough yet accessible read…Adds to a growing body of critical work that tackles social issues in relation to the realm of ‘nature,’ pushing back simultaneously against the whiteness of both literary studies and ecocriticism.
-- Lydia Ayame Hiraide LSE Review of Books


A tremendously illuminating study of how black writers wrestle with black precarity. Bennett’s refreshing and field-defining approach shows how both classic and contemporary African American authors undo long-held assumptions of the animal–human divide.
-- Salamishah Tillet, author of Sites of Slavery: Citizenship and Racial Democracy in the Post–Civil Rights Imagination


Bennett writes so beautifully that it hurts. Imagine a world of animals—rats, cocks, mules, and dogs—that prompt renewed ways of seeing, thinking, and living beyond cages or chains. These absorbing, deeply moving pages bring to life a newly reclaimed ethics, and black feeling beyond the claims of property or propriety.
-- Colin Dayan, author of With Dogs at the Edge of Life and The Law Is a White Dog


Being Property Once Myself is destined to be an event. Exhilarating and original, it is as much a work of literary history as it is of literary theory, as much a poetic invocation as it is critical intervention, and as much about animals as it is about people, elegantly uniting the many singularities that constitute, collectively, black literary culture.
-- Akira Mizuta Lippit, author of Electric Animal: Toward a Rhetoric of Wildlife


By turns leading-edge and unaffected, revelatory and understated, Bennett appears much less concerned to prove that his chops as a critic and theorist are equal to his poetic abilities…By way of close readings of some well-established, and a few wholly unnoticed, scenes of black/Animal apposition or relationality, Bennett’s Being Property shares in the ensemblic turn toward black ecological criticism and theory exploring blackness, animality, ground-life, and philosophical posthumanism…Bennett stands to add many more fans to the crowd of us who’ve relished his poetic talents over many years.
-- Maurice Wallace Society for US Intellectual History