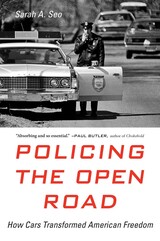 How the rise of the car, the symbol of American personal freedom, inadvertently led to ever more intrusive policing—with disastrous consequences for racial equality in our criminal justice system.

When Americans think of freedom, they often picture the open road. Yet nowhere are we more likely to encounter the long arm of the law than in our cars. Sarah Seo reveals how the rise of the automobile led us to accept—and expect—pervasive police power. As Policing the Open Road makes clear, this radical transformation in the nature and meaning of American freedom has had far-reaching political and legal consequences.

Before the twentieth century, most Americans rarely came into contact with police officers. But with more and more drivers behind the wheel, police departments rapidly expanded their forces and increased officers’ authority to stop citizens who violated traffic laws. The Fourth Amendment—the constitutional protection against unreasonable searches and seizures—did not effectively shield individuals from government intrusion while driving. Instead, jurists interpreted the amendment narrowly. In a society dependent on cars, everyone—the law-breaking and law-abiding alike—would be subject to discretionary policing.

Seo overturns prevailing interpretations of the Warren Court’s due process revolution. The justices’ efforts to protect Americans did more to accommodate than to limit police intervention, and the new criminal procedures inadvertently sanctioned discrimination by officers of the law. Constitutional challenges to traffic stops largely failed, and motorists “driving while black” had little recourse to question police demands. Seo shows how procedures designed to safeguard us on the road ultimately undermined the nation’s commitment to equal protection before the law.

REVIEWS
A fascinating examination of how the automobile reconfigured American life, not just in terms of suburbanization and infrastructure but with regard to deeply ingrained notions of freedom and personal identity…This is what makes Seo’s book so engrossing: it is filled with riveting, deeply researched accounts of interactions between drivers and cops back when the rules governing such incidents were still hazy. At times, it feels like an underground history—of closeted gay men testing the limits of privacy; of African-Americans, like Jack Johnson or Martin Luther King, Jr., simply trying to get from one place to another.
-- Hua Hsu New Yorker


Remarkable…Seo’s idea is that the problem of policing cars, far from being a remote corner of the law, is central to how the jurisprudence of the Fourth Amendment (searches and seizures) took shape during the past hundred years.
-- Nathan Heller New Yorker


Seo uses motor vehicle search and seizure cases to show how the rise of the automobile dramatically expanded the role of police in American society. But what began as simple traffic law enforcement evolved into a crime-control strategy that disproportionately targeted black motorists…An important revisionist history of the due process revolution.
-- Jackson Smith Public Books


Among the book’s distinctly valuable contributions, readers learn of several of the ancestors of the better-publicized violent police stops of recent decades…An indispensable work of unique importance.
-- Peter Norton Technology and Culture


How have we gone without this book for so long? Seo’s momentous Policing the Open Road is the revelatory story of how the automobile fueled a new kind of freedom while propelling new forms of police power. Things that seemed like standard features of the world in which we live—everything from the pervasiveness of law-breaking, to the ubiquity of the patrol car, to the reproduction of race and class on the highways—turn out in Seo’s brilliant legal history to arise out of the ambiguities of the automobile revolution. Reader-drivers beware: you’ll never speed the same way again.
-- John Fabian Witt, author of Lincoln’s Code


Policing the Open Road is a highly readable account of how the automobile changed everything. With insights ranging from the joy of the open road to the indignities—and worse—of ‘driving while black,’ Sarah Seo makes the case that the 'law of the car’ has eroded our rights to privacy and equal justice. Careful scholarship is rarely so absorbing and so essential.
-- Paul Butler, author of Chokehold


At the heart of Sarah Seo’s Policing the Open Road stands a paradox: that even as the rise of the automobile promised unbridled freedom, it also subjected Americans to a level of policing previously unimaginable. With this sweeping, smart, and stimulating account, Seo has accomplished that most coveted of historian’s aspirations: enabling her readers to see through a new lens not only the past but the present and future as well.
-- Risa Goluboff, author of Vagrant Nation


Seo’s great insight is that twentieth-century law enforcement and the modern law of criminal procedure developed hand in hand with cars and the radically increased mobility they provided; the automotive revolution shaped ideas and expectations about law enforcement and changed the very meaning of freedom. Policing the Open Road is a fresh and revelatory work of cultural history as well as a major contribution to scholarship on policing and criminal procedure.
-- David Alan Sklansky, Stanford University


A brilliant and groundbreaking book that will fundamentally reshape the way we think about the police, criminal procedure, and American freedom. Seo takes us from the Model T to the twenty-first century to show how policing cars, unexpectedly, made possible both the democratization of law enforcement and the systematic racialized policing of minorities.
-- Bernard E. Harcourt, author of The Counterrevolution


With vivid prose and a lovely sense of detail and personalities, Seo tells how, from the dawn of the automotive age to the 2015 death of Sandra Bland, cars and interactions with drivers shaped the rules governing policing—not just on the road but everywhere. How judicial commitment to the rule of law led to an embrace of massive discretion, with all its pathologies, is a story anyone interested in current criminal justice realities ought to read.
-- Daniel Richman, Columbia Law School


Brilliantly connects the history of modern policing with the history of the car. Policing the Open Road is an important book for this moment.
-- 99% Invisible

TABLE OF CONTENTS
Cover
Title Page
Copyright
Dedication
Contents
Introduction
1. A Mystery of Traffic
2. From Lumbering Foot Patrolmen to Motor-Mounted Policemen
3. The Automotive Fourth Amendment
4. It Could Happen to You
5. The Right to Privacy in Public
6. The Fourth Amendment Tool in Criminal Patrol
Epilogue
Abbreviations
Notes
Acknowledgments
C
I
P
T
Y