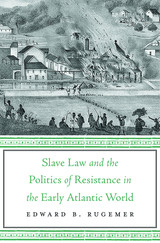 The success of the English colony of Barbados in the seventeenth century, with its lucrative sugar plantations and enslaved African labor, spawned the slave societies of Jamaica in the western Caribbean and South Carolina on the American mainland. These became the most prosperous slave economies in the Anglo-American Atlantic, despite the rise of enlightened ideas of liberty and human dignity. Slave Law and the Politics of Resistance in the Early Atlantic World reveals the political dynamic between slave resistance and slaveholders’ power that marked the evolution of these societies. Edward Rugemer shows how this struggle led to the abolition of slavery through a law of British Parliament in one case and through violent civil war in the other.

In both Jamaica and South Carolina, a draconian system of laws and enforcement allowed slave masters to maintain control over the people they enslaved, despite resistance and recurrent slave revolts. Brutal punishments, patrols, imprisonment, and state-sponsored slave catchers formed an almost impenetrable net of power. Yet slave resistance persisted, aided and abetted by rising abolitionist sentiment and activity in the Anglo-American world. In South Carolina, slaveholders exploited newly formed levers of federal power to deflect calls for abolition and to expand slavery in the young republic. In Jamaica, by contrast, whites fought a losing political battle against Caribbean rebels and British abolitionists who acted through Parliament.

REVIEWS
This is, to my mind, the best history of the Anglo slaveholders and their slaves in the western Caribbean.
-- Ira Berlin, author of The Long Emancipation: The Demise of Slavery in the United States


At its heart, this spirited and comprehensive reevaluation of the British imperial project in the Americas is a story of the clashing politics of slave resistance and slaveholders’ repression. It reveals how the slave laws, first initiated in Barbados and later adopted in Jamaica and South Carolina, became progressively more draconian in the face of mounting slave resistance.
-- R. J. M. Blackett, author of The Captive’s Quest for Freedom: Fugitive Slaves, the 1850 Fugitive Slave Law, and the Politics of Slavery


In this significant contribution to the history of slavery, we see how slaveholding regimes developed in response to slave resistance, were transformed in the Age of Revolution, and finally succumbed to concerted action from an array of antislavery forces. Tracing this process through the most profitable and brutal slave societies in Anglo-America, Rugemer sets a new standard for comparative history.
-- Vincent Brown, author of The Reaper’s Garden: Death and Power in the World of Atlantic Slavery


Edward Rugemer’s vital new book focuses our attention on the relationship between politics and organized violence in the two largest economies of British America. A superb example of comparative history that reveals how the most pernicious institution in the Western Hemisphere contained the seeds of its own demise.
-- Peter C. Mancall, author of Nature and Culture in the Early Modern Atlantic


Offers new insight into the slave societies of Barbados, Jamaica, and South Carolina, which all emerged from the same historical moment and shared the same legal genealogy that developed during the expansion of England’s Atlantic empire in the seventeenth century…An excellent read, which will appeal to both specialized and broader audiences.
-- Justin Iverson H-Net Reviews