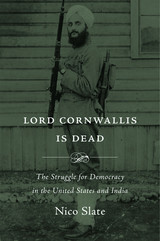 Do democratic states bring about greater social and economic equality among their citizens? Modern India embraced universal suffrage from the moment it was free of British imperial rule in 1947—a historical rarity in the West—and yet Indian citizens are far from realizing equality today. The United States, the first British colony to gain independence, continues to struggle with intolerance and the consequences of growing inequality in the twenty-first century.

From Boston Brahmins to Mohandas Gandhi, from Hollywood to Bollywood, Nico Slate traces the continuous transmission of democratic ideas between two former colonies of the British Empire. Gandhian nonviolence lay at the heart of the American civil rights movement. Key Indian freedom fighters sharpened their political thought while studying and working in the United States. And the Indian American community fought its own battle for civil rights.

Spanning three centuries and two continents, Lord Cornwallis Is Dead offers a new look at the struggle for freedom that linked two nations. While the United States remains the world’s most powerful democracy, India—the world’s most populous democracy—is growing in wealth and influence. Together, the United States and India will play a predominant role in shaping the future of democracy.

REVIEWS
For most of their histories, India and the United States have been distant lands. And yet, these two countries—both subcontinental in size, both colonized by Britain, both struggling to achieve the promise of democracy—have gazed at each other from afar, entranced by their family resemblance. Nico Slate tells the fascinating, delightful tale of these separated siblings, one that begins with Indians meeting ‘Indians’ and ends with civil disobedience and California yoga studios.
-- Daniel Immerwahr, author of Thinking Small: The United States and the Lure of Community Development


Nico Slate’s game-changing book on India and the United States invites us to probe anew the meanings of freedom and democracy. Elegantly traversing the boundaries of comparative, transnational, and cultural history, Lord Cornwallis Is Dead is sure to attract a wide range of readers from different disciplines.
-- Sandhya Shukla, author of India Abroad: Diasporic Cultures of Postwar America and England


An eloquently written, deeply consequential, and engaging account that recognizes the achievements of the struggle for freedom in the two countries without shying away from the many shortcomings of their particular styles of democracy and their unending struggles for political, social, and economic freedom.
-- Choice