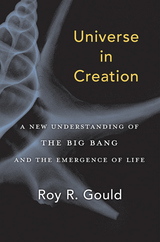 We know the universe has a history, but does it also have a story of self-creation to tell? Yes, in Roy R. Gould’s account. He offers a compelling narrative of how the universe—with no instruction other than its own laws—evolved into billions of galaxies and gave rise to life, including humans who have been trying for millennia to comprehend it. Far from being a random accident, the universe is hard at work, extracting order from chaos.

Making use of the best current science, Gould turns what many assume to be true about the universe on its head. The cosmos expands inward, not outward. Gravity can drive things apart, not merely together. And the universe seems to defy entropy as it becomes more ordered, rather than the other way around. Strangest of all, the universe is exquisitely hospitable to life, despite its being constructed from undistinguished atoms and a few unexceptional rules of behavior. Universe in Creation explores whether the emergence of life, rather than being a mere cosmic afterthought, may be written into the most basic laws of nature.

Offering a fresh take on what brought the world—and us—into being, Gould helps us see the universe as the master of its own creation, not tethered to a singular event but burgeoning as new space and energy continuously stream into existence. It is a very old story, as yet unfinished, with plotlines that twist and churn through infinite space and time.
REVIEWS
The universe could not have dreamt up a better press agent for its story than Roy Gould. From what connects katydids and elephants, through the natural evolution of RNAs, to exoplanets and the Mandelbrot set—the author’s sense of wonder at what is around us is absolutely infectious. Gould’s explanation of how order is naturally created by using disorder at all scales is the best I have seen, making sense of purposefulness without purpose. A joyous romp through a cosmos full of wonders, and changing still!', Roald Hoffmann, chemist and writer

'When we wonder where we came from, or ponder the meaning of our lives, our thoughts might go back to childhood. In his search for meaning, Roy Gould rewinds further to where everything began: the birth of the cosmos. He is the universe’s joyful biographer, recognizing that its story and ours are intertwined, and that one of the most extraordinary things about the universe is that it created beings that can observe and appreciate it. Universe in Creation asks whether or not the universe’s creation of stars, galaxies, living cells, and human beings reveals an unfolding plan. It is a delightful, spirited, and brilliant inquiry.', Molly Bentley, Executive Producer, Big Picture Science


TABLE OF CONTENTS
Cover
Title Page
Copyright
Dedication
Contents
Introduction
Part One. Where Does the Universe Come From?
1. What Is the Universe—and How Large Is It?
2. Galaxies Misbehave
3. What’s the Big Idea?
4. Einstein, Gravity, and the Universe
5. The Big Bang and Beyond
6. Building Plans
Part Two. How Did Structure Arise from Chaos?
7. An Apple Pie from Scratch
8. Into the Abyss
9. Into the Cauldron
10. Into the Light
Part Three. Is Life Merely a Roll of the Cosmic Dice?
11. The Great Inventor
12. Information, Please!
13. Is Evolution Predictable?
14. The Sensational Sensations
15. Design without a Designer?
16. “Who’s There?”
Epilogue: What Is Worthy of Our Wonder?
Notes
Acknowledgments
Index