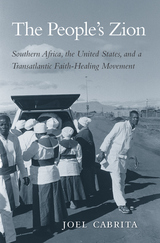 In The People’s Zion, Joel Cabrita tells the transatlantic story of Southern Africa’s largest popular religious movement, Zionism. It began in Zion City, a utopian community established in 1900 just north of Chicago. The Zionist church, which promoted faith healing, drew tens of thousands of marginalized Americans from across racial and class divides. It also sent missionaries abroad, particularly to Southern Africa, where its uplifting spiritualism and pan-racialism resonated with urban working-class whites and blacks.

Circulated throughout Southern Africa by Zion City’s missionaries and literature, Zionism thrived among white and black workers drawn to Johannesburg by the discovery of gold. As in Chicago, these early devotees of faith healing hoped for a color-blind society in which they could acquire equal status and purpose amid demoralizing social and economic circumstances. Defying segregation and later apartheid, black and white Zionists formed a uniquely cosmopolitan community that played a key role in remaking the racial politics of modern Southern Africa.

Connecting cities, regions, and societies usually considered in isolation, Cabrita shows how Zionists on either side of the Atlantic used the democratic resources of evangelical Christianity to stake out a place of belonging within rapidly-changing societies. In doing so, they laid claim to nothing less than the Kingdom of God. Today, the number of American Zionists is small, but thousands of independent Zionist churches counting millions of members still dot the Southern African landscape.
REVIEWS
The People’s Zion is an outstanding book, and the topic it explores—the origins and evolution of so-called ‘Zionist’ churches in South Africa—is important and remarkably under-studied. Original, well researched, conceptually sophisticated, and just very, very smart.', James T. Campbell, Stanford University

'Cabrita has produced a meticulously researched and engagingly written piece of scholarship. It is to my knowledge the first work to pull together the entire Zion movement from its origins in mid-nineteenth-century Australia to turn-of-the-twentieth-century America to twentieth- and twenty-first-century southern Africa. The People’s Zion promises not only to be an important contribution to Southern African Studies, but to open up new roads of inquiry for scholars and general readers alike.', Stephen W. Martin, King’s University, Edmonton, Canada

'Drawing on archives in South Africa, Swaziland, Sweden, and Illinois, this remarkable book tells an altogether unlikely story. It features an Australian preacher who, in the late nineteenth century, established a Christian utopia in tiny Zion, Illinois, a town which was to be the launching pad for one of southern Africa’s leading Christian movements. The People’s Zion brings to light a whole network of textual, intellectual, and theological exchange that drew American midwesterners into close dialogue with co-travelers in southern Africa. In so doing, Cabrita places African Christians at the center of the history of global Christianity.', Derek Peterson, University of Michigan