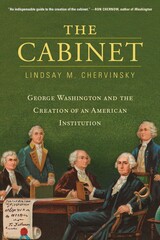 Winner of the Daughters of the American Revolution’s Excellence in American History Book Award
Winner of the Thomas J. Wilson Memorial Prize

“Cogent, lucid, and concise…An indispensable guide to the creation of the cabinet…Groundbreaking…we can now have a much greater appreciation of this essential American institution, one of the major legacies of George Washington’s enlightened statecraft.”
—Ron Chernow

On November 26, 1791, George Washington convened his department secretaries—Alexander Hamilton, Thomas Jefferson, Henry Knox, and Edmund Randolph—for the first cabinet meeting. Why did he wait two and a half years into his presidency to call his cabinet? Because the US Constitution did not create or provide for such a body. Faced with diplomatic crises, domestic insurrection, and constitutional challenges—and finding congressional help distinctly lacking—he decided he needed a group of advisors he could turn to for guidance.

Authoritative and compulsively readable, The Cabinet reveals the far-reaching consequences of this decision. To Washington’s dismay, the tensions between Hamilton and Jefferson sharpened partisan divides, contributing to the development of the first party system. As he faced an increasingly recalcitrant Congress, he came to treat the cabinet as a private advisory body, greatly expanding the role of the executive branch and indelibly transforming the presidency.

“Important and illuminating…an original angle of vision on the foundations and development of something we all take for granted.”
—Jon Meacham

“Helps us understand pivotal moments in the 1790s and the creation of an independent, effective executive.”
—Wall Street Journal

REVIEWS
Cogent, lucid, and concise, Lindsay Chervinsky’s book gives us an indispensable guide to the creation of the cabinet. With her groundbreaking study, we can now have a much greater appreciation of this essential American institution, one of the major legacies of George Washington’s enlightened statecraft.
-- Ron Chernow, author of Washington: A Life


Tracks the emergence of a body that the Constitution never mentions…Argues persuasively that focusing on its development helps us understand pivotal moments in the 1790s and the creation of an independent, effective executive.
-- William Anthony Hay Wall Street Journal


Fantastic…My admiration for America’s first and possibly finest president has grown further…Washington excelled more than many of his successors at harnessing the cabinet to exercise his political will…A compelling story.
-- Clayton Trutor New Criterion


A thorough and insightful account of how the federal government came to have a ‘cabinet’ resembling the British one. But it doubles as a poignant tale of how Washington’s unifying authority broke down over his time in office.
-- Tom Cutterham Early American Literature


Well-researched, thoughtful, and fascinating…Between 1789 and 1797, George Washington formulated the standards against which all subsequent presidents must be measured.
-- Clay S. Jenkinson Governing.com


With smart analysis and lively writing, Chervinsky illuminates how Washington and his secretaries breathed life into an institution never directly mentioned in the U.S. Constitution.
-- Tyson Reeder Parliaments, Estates, and Representation


Traces the evolution of the cabinet from British history through George Washington’s presidency, explaining how experimentation, personalities, internal and international crises, loyalty and betrayal, and political partisanship impacted not only the development of Washington’s advisory body, but foreign and domestic policies as well.
-- Library Journal


In this important and illuminating study, Lindsay Chervinsky has given us an original angle of vision on the foundations and development of something we all take for granted: the president’s Cabinet.
-- Jon Meacham, author of The Soul of America


A clear, concise, and lively study of a topic that has long needed such coverage. Chervinsky skillfully shows the Revolutionary roots of the early cabinet and explores how it juggled precedent, public opinion, partisanship, and the balance of power. Anyone interested in American politics will want to read this informative and timely book.
-- Joanne B. Freeman, author of The Field of Blood: Violence in Congress and the Road to Civil War


Chervinsky offers a new perspective on a crucial and enduring institution in American politics, persuasively showing the centrality of the cabinet in the founding era and beyond. With clear, crisp prose and a compelling story, this book is a must-read not only for historians, political scientists, and legal scholars, but also for anyone interested in learning about a foundation of the American republic.
-- Gautham Rao, author of National Duties: Custom Houses and the Making of the American State


A riveting, beautifully written story of George Washington’s efforts to figure out how to achieve his goals in a fast-changing environment. By placing Washington’s cabinet meetings within the broader narratives of the Revolutionary War and the politics of the early republic, Chervinsky brings all the tensions of the big stories into Washington’s efforts to administer America’s new government. She makes reading about the evolution of institutions fun!
-- Johann N. Neem, author of Democracy’s Schools: The Rise of Public Education in America


A well-written and much-needed addition to our understanding of the early American Republic.
-- Kathryn Gehred H-Net Reviews


Provides the reader with the first modern treatment of the Cabinet in decades. Chervinsky shows how the Cabinet came to be, and how it changed in the early days of the republic.
-- Stephen Donnelly Historical Journal of Massachusetts