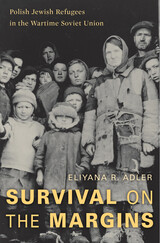 The forgotten story of 200,000 Polish Jews who escaped the Holocaust as refugees stranded in remote corners of the USSR.

Between 1940 and 1946, about 200,000 Jewish refugees from Poland lived and toiled in the harsh Soviet interior. They endured hard labor, bitter cold, and extreme deprivation. But out of reach of the Nazis, they escaped the fate of millions of their coreligionists in the Holocaust.

Survival on the Margins is the first comprehensive account in English of their experiences. The refugees fled Poland after the German invasion in 1939 and settled in the Soviet territories newly annexed under the Molotov-Ribbentrop Pact. Facing hardship, and trusting little in Stalin, most spurned the offer of Soviet citizenship and were deported to labor camps in unoccupied areas of the east. They were on their own, in a forbidding wilderness thousands of miles from home. But they inadvertently escaped Hitler’s 1941 advance into the Soviet Union. While war raged and Europe’s Jews faced genocide, the refugees were permitted to leave their settlements after the Soviet government agreed to an amnesty. Most spent the remainder of the war coping with hunger and disease in Soviet Central Asia. When they were finally allowed to return to Poland in 1946, they encountered the devastation of the Holocaust, and many stopped talking about their own ordeals, their stories eventually subsumed within the central Holocaust narrative.

Drawing on untapped memoirs and testimonies of the survivors, Eliyana Adler rescues these important stories of determination and suffering on behalf of new generations.

REVIEWS
[A] groundbreaking new book chronicling the fate of the quarter-million or so Polish Jews who evaded Hitler only to wind up in the hands of Stalin.
-- Ruth Franklin New York Review of Books


It is a neglected area of scholarship, but in this thoroughly-researched book, she fills that yawning gap admirably.
-- Sheldon Kirshner Times of Israel


This is an innovative, intellectually sophisticated, yet readily accessible, humane, and handsomely produced book. It casts Polish-Jewish relations with the Soviet wartime authorities in a more positive light than totalitarianism theorists might have predicted.
-- William W. Hagen Holocaust and Genocide Studies


This intriguing, well-written social history is the most detailed treatment to date in English of the Polish Jews who spent the war years in the USSR, either because they fled the Germans or because they were arrested and deported. One of the book’s major achievements is Adler’s mastery of an impressive array of personal interviews and testimonies from various archives in Poland, the United States, Israel, and elsewhere.
-- Samuel D. Kassow, Trinity College


An ambitious and deeply researched book about the relatively unknown Polish Jewish refugees who spent some or all of World War II in Soviet territory. Adler is scrupulously fair in assessing the Soviet Union’s role in ‘saving’ these refugees, accurate about what we know and cannot know about Stalin’s intentions, and sensitive to the nuances of Polish antisemitism and anticommunism. This sophisticated, elegantly written work will expand the boundaries of Holocaust studies.
-- Lewis H. Siegelbaum, Michigan State University


The largest group left after the Holocaust of interwar Europe’s biggest Jewish community survived the Nazi era in the eastern reaches of the Soviet Union. This important, extensively researched book documents the experiences of this important segment of Polish Jewry during the Second World War.
-- David Engel, New York University


Lovingly written and meticulously researched, Survival on the Margins plumbs a history that scholars only sketched before. A landmark study, it brings a singularly significant chapter of the Holocaust into sharp focus. Situating Polish Jewish refugees in the broad sweep of the wartime Soviet Union, Adler deftly negotiates both the large political picture and the immediate social environment, while never losing sight of the individuals whose lives were shaped by their flight east.
-- Debórah Dwork, Clark University


A unique compendium of knowledge for researchers in the social sciences and humanities, as well as for readers interested in the social history of pain and determination of a group whose memory the author has managed to restore and thus make the history of World War II and the Holocaust more complete.
-- Urszula Markowska-Manista Zeitschrift für Religions- und Geistesgeschichte

TABLE OF CONTENTS
Cover
Title Page
Copyright
Dedication
Contents
Note on Transliteration and Translation
Introduction: On the Other Side
1. Esau or Laban?: Wrestling with the German and Soviet Occupations
2. If a Man Did Flee from a Lion, and a Bear Met Him: The Soviet Embrace
3. Jewish Luck: Deportation to Siberia
4. City of Want: Survival in Central Asia
5. Nusekh Poyln, or Yetsies Poyln?: The Polish Way, or Exodus from Poland?
Conclusion: Expanding the Compass of Survival
Notes
Bibliography
Acknowledgments
Index