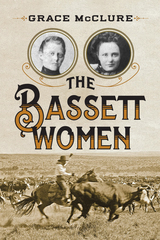 In the late nineteenth century, Brown’s Park, a secluded valley astride the Utah-Colorado border, was a troubled land of deadly conflict among cattle barons, outlaws, rustlers, and small ranchers. Homesteader Elizabeth Bassett gained a tough reputation of her own, and her daughters followed suit, going on to become members of Butch Cassidy and the Wild Bunch’s inner circle. Ann—who counted Cassidy among her lovers—became known as “queen of the cattle rustlers.” Both sisters proved themselves shrewd businesswomen as they fended off hostile takeovers of the family ranch. Through the following decades, the sisters became the stuff of legend, women who embodied the West’s fearsome reputation, yet whose lived experiences were far more nuanced. Ann became a writer. Josie, whose cabin still stands at present-day Dinosaur National Monument, applied her pioneer ethics to a mechanized world and became renowned for her resourcefulness, steadfastness, and audacity.

For The Bassett Women, Grace McClure tracked down and untangled the legends of Brown’s Park, one of the way stations of the fabled “Outlaw Trail,” while creating an evenhanded and indelible portrait of the Bassetts. Based on interviews, written records, newspapers, and archives, The Bassett Women is one of the few credible accounts of early settlers on Colorado’s western slope, one of the last strongholds of the Old West.

Grace McClure was a freelance writer based in Tucson, Arizona.