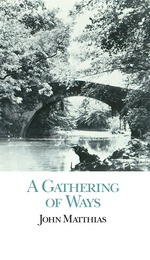 A Gathering of Ways is John Matthias’ first collection of poems since the publication of his warmly received Northern Summer collection in 1985. The book consists of three long poems dealing with the geography, geology, prehistory, and history of two places closely identified with Matthias’ work, the East Anglian region of Britain and the American Midwest, and a third place that provides the book with a new and deeply resonant setting: those parts of southern France and northern Spain through which run the famous pilgrimage routes to Santiago de Compostela.

“An East Anglian Diptych” explores those parts of Cambridgeshire, Suffolk, and Norfolk linked by three rivers and by those ancient paths and tracks known as ley lines which connect locality and locality and time with time. “Facts From an Apocryphal Midwest” explores another group of trails that began as prehistoric paths down which copper from Lake Superior was carried from the early days of the mound-builders. Despite the historical backdrop of these poems, both bring the reader into the present in unexpected ways, preparing him or her for the strange and visionary “A Compostela Diptych,” winner of the Poetry Society of America’s George Bogin Memorial Award.