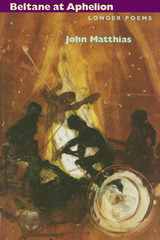 Beltane at Aphelion collects all of John Matthias’s longer poems and is published simultaneously with Swimming at Midnight, which collects his shorter poems. The volume includes his exuberant experiments from the 1960s, Poem in Three Parts and Bucyrus, followed by The Stefan Bathory & Mihail Lermontov Poems, his comedic diptych from the 1970s set on a Polish and a Russian ocean liner, and by Northern Summer, his meditation on history and language set in Scotland. It concludes with the three long poems first published in A Gathering of Ways which explore ancient paths and river routes in the East Anglian region of Britain and the American Midwest, and, in the most ambitious poem he has yet written, the famous pilgrim trails to Santiago de Compostela in Spain. About the books in which these poems originally appeared, critics and poets have written with enthusiasm.

John Matthias is the author of seven previous volumes of poetry. He teaches at Notre Dame University.