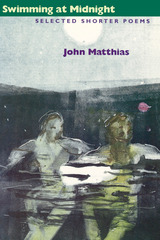 Swimming at Midnight collects the short and middle-length poems from John Matthias’s earlier books together with twenty poems that have previously appeared only in magazines. It is published simultaneously with Beltane at Aphelion, which includes all of Matthias’s longer poems. The two books together represent some thirty years of his work.

The poems in Swimming at Midnight range from early lyrics written in American during the late 1960s to meditative poems dealing with historical, geographical and cultural themes deriving from Matthias’s years in England in the seventies and eighties; they include the epistolary poems from Turns, “Poem for Cynouai” from Crossing, “A Wind in Roussillon” from Northern Summer, and the formal experiments engaging issues of poetics and metaphysics for which Matthias is well known. The book concludes with a section of new poems and translations dealing both with the public world of modern history and the private experience of life in the century’s final decade. The last poem of all connects the work in Swimming at Midnight with the last of the long poems in Beltane at Aphelion.

Critics have been warm in their praise of Matthias’s work. Robert Duncan called his early poetry “the work of a Goliard—one of those wandering souls out of a Dark Age in our own time,” and Guy Davenport has said that his recent work makes him “one of the leading poets in the USA.” D. M. Thomas in the TLS admired the “virtuosity” of Turns and the way “life presses into the poems,” while John Fuller in the same journal found the poems in Crossing “bursting with a masterful intelligence.” In a long essay on Northern Summer, Jeremy Hooker wrote: “In his combination of lyrical and discursive voices, as in subject and concern, Matthias has an exciting range…He writes in some poems from a tension between a scribe’s respect for the integrity of his materials and a magician’s freedom to transform them, and in many poems he brings together the contrasting gifts and is fully present as himself, both scribe and magician.”

John Matthias is the author of seven previous volumes of poetry. He teaches at Notre Dame University.