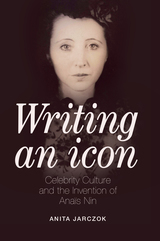 Anaïs Nin, the diarist, novelist, and provocateur, occupied a singular space in twentieth-century culture, not only as a literary figure and voice of female sexual liberation but as a celebrity and symbol of shifting social mores in postwar America. Before Madonna and her many imitators, there was Nin; yet, until now, there has been no major study of Nin as a celebrity figure.

In Writing an Icon, Anita Jarczok reveals how Nin carefully crafted her literary and public personae, which she rewrote and restyled to suit her needs and desires. When the first volume of her diary was published in 1966, Nin became a celebrity, notorious beyond the artistic and literary circles in which she previously had operated. Jarczok examines the ways in which the American media appropriated and deconstructed Nin and analyzes the influence of Nin’s guiding hand in their construction of her public persona.

The key to understanding Nin’s celebrity in its shifting forms, Jarczok contends, is the Diary itself, the principal vehicle through which her image has been mediated. Combining the perspectives of narrative and cultural studies, Jarczok traces the trajectory of Nin’s celebrity, the reception of her writings. The result is an innovative investigation of the dynamic relationships of Nin’s writing, identity, public image, and consumer culture.

Anita Jarczok teaches American literature and contemporary cultural theory at the University of Bielsko-Biała, Poland. Her research interests include literature, narrative, and gender and cultural studies, and she is the author of many articles and book chapters on Nin, celebrity, and sexuality.

TABLE OF CONTENTS
Contents
Acknowledgments
Introduction: Anaïs Nin and Her Diary
1. Literary Celebrity, the Modernist Marketplace, and Marketing the Diary
2. Public Promotion of the Private Self: Anaïs Nin's Self-Constructions in the Diary
3. Public Relations of the Self
4. Success, Scandal, Sex, and the Search for the “Real” Anaïs Nin
Conclusion: Anaïs Nin in the Twenty-First Century
Notes
Bibliography
Index