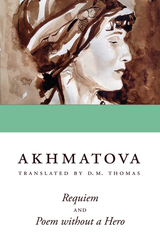 With this edition Swallow Press presents two of Anna Akhmatova’s best-known works that represent the poet at full maturity, and that most trenchantly process the trauma she and others experienced living under Stalin’s regime.

Akhmatova began the three-decade process of writing “Requiem” in 1935 after the arrests of her son, Lev Gumilev, and her third husband. The autobiographical fifteen-poem cycle primarily chronicles a mother’s wait—lining up outside Leningrad Prison every day for seventeen months—for news of her son’s fate. But from this limbo, Akhmatova expresses and elevates the collective grief for all the thousands vanished under the regime, and for those left behind to speculate about their loved ones’ fates. Similarly, Akhmatova wrote “Poem without a Hero” over a long period. It takes as its focus the transformation of Akhmatova’s beloved city of St. Petersburg—historically a seat of art and culture—into Leningrad. Taken together, these works plumb the foremost themes for which Akhmatova is known and revered. When Ohio University Press published D. M. Thomas’s translations in 1976, it was the first time they had appeared in English. Under Thomas’s stewardship, Akhmatova’s words ring clear as a bell.

REVIEWS
“Translations of the ‘two greatest achievements’ of Akhmatova’s maturity.… A decided addition to any library.”—Choice