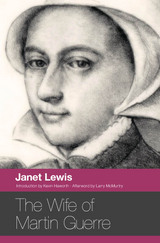 In this new edition of Janet Lewis’s classic short novel, The Wife of Martin Guerre, Swallow Press executive editor Kevin Haworth writes that Lewis’s story is “a short novel of astonishing depth and resonance, a sharply drawn historical tale that asks contemporary questions about identity and belonging, about men and women, and about an individual’s capacity to act within an inflexible system.” Originally published in 1941, The Wife of Martin Guerre has earned the respect and admiration of critics and readers for over sixty years.

Based on a notorious trial in sixteenth-century France, this story of Bertrande de Rols is the first of three novels making up Lewis’s Cases of Circumstantial Evidence suite (the other two are The Trial of Sören Qvist and The Ghost of Monsieur Scarron).

Swallow Press is delighted and honored to offer readers beautiful new editions of all three Cases of Circumstantial Evidence novels, each featuring a new introduction by Kevin Haworth.

Janet Lewis was a novelist, poet, and short-story writer whose literary career spanned almost the entire twentieth century. The New York Times has praised her novels as “some of the 20th century’s most vividly imagin