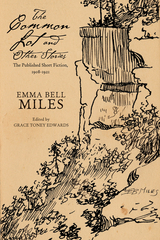 The seventeen narratives of The Common Lot and Other Stories, published in popular magazines across the United States between 1908 and 1921 and collected here for the first time, are driven by Emma Bell Miles’s singular vision of the mountain people of her home in southeastern Tennessee. That vision is shaped by her strong sense of social justice, her naturalist’s sensibility, and her insider’s perspective.

Women are at the center of these stories, and Miles deftly works a feminist sensibility beneath the plot of the title tale about a girl caught between present drudgery in her father’s house and prospective drudgery as a young wife in her own. Wry, fiery, and suffused with details of both natural and social worlds, the pieces collected here provide a particularly acute portrayal of Appalachia in the early twentieth century.

Miles’s fiction brings us a world a century in the past, but one that will easily engage twenty-first-century readers. The introduction by editor and noted Miles expert Grace Toney Edwards places Miles in the literary context of her time. Edwards highlights Miles’s quest for women’s liberation from patriarchal domination and oppressive poverty, forces against which Miles herself struggled in making a name for herself as a writer and artist. Illustrations by the author and Miles family photographs complement the stories.

Emma Bell Miles (1879 –1919) was a gifted writer, poet, naturalist, and artist with a keen perspective on Appalachian life and culture. She chronicled her home region through her prolific journals, illustrations, essays, poetry, and fiction.

Grace Toney Edwards is professor emerita of Appalachian Studies and English at Radford University. She was senior editor of A Handbook to Appalachia: An Introduction to the Region and coeditor of the literature section of The Encyclopedia of Appalachia.

TABLE OF CONTENTS
Contents
illustrations
Preface
Acknowledgments
Introduction: The Published Short Stories of Emma Bell Miles,1908–21, by Grace Toney Edwards
Gallery
1: The Common Lot
2: The Broken Urn
3: A Dark Rose
4: The Home-Coming of Evelina
5: Mallard Plumage
6: The Dulcimore
7: The Breaks of Caney
8: Flyaway Flittermouse
9: Three Roads and a River
10: Flower of Noon
11: At the Top of Sourwood
12: Enchanter’s Nightshade
13: Thistle Bloom
14: A Dream of the Dust
15: Love o’ Man
16: The White Marauder
17: Turkey Luck
Suggestions for further reading and research