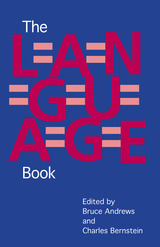 “Ok murky in alter all end, unpredictable day, with rainshine any degree night, the sun kin warm and hot. Enough stone or other jugs lineup of whatever is In Through Out That’s light as much as known Differences evanesce Like, where and/or what on the equator might be french or spanish Longitude and latitude, yep yep sure Americana.”—Larry Eigner, commentary on a selection from Ger­trude Stein’s Tender Buttons

This selection of essays and poetry from the first three volumes of L=A=N=G=U=A=G=E magazine dis­cusses a “spectrum of writing that places its attention primarily on language and ways of making meaning, that takes for granted neither vocabulary, grammar, process, shape, syntax, program, nor sub­ject matter.” (Bernstein and Andrews) The various writers shun labels, slogans, or catch-phrases; their exploration of the ways that meanings and values are re­vealed through the written word is in­tended to open the field of poetic activity, not close it.

The common thread of these essays is the multitude and scope of words’ refer­ential powers—denotative, connotative, and associational; and studying these powers is ultimately a social and political activity as well as an aesthetic one.

AUTHOR BIOGRAPHY
Bruce Andrews’ essays are collected in Paradise & Method: Poetics & Praxis. Recent books of poetry and performance scores in collaboration with choreographer Sally Silvers include Ex Why Zee, Tizzy Boost, I Don’t Have Any Paper So Shut Up, and Give Em Enough Rope. Andrews teaches political science at Fordham University in New York City. Charles Bernstein is the author of twenty collections of poetry, including Republics of Reality: Poems 1975-1995, Dark City, and Rough Trades, and two collections of essays, Content’s Dream: Essays 1975-1984 and A Poetics. He is David Gray Professor of Poetry and Letters at the State University of New York at Buffalo, where he teaches in the Poetics Program.