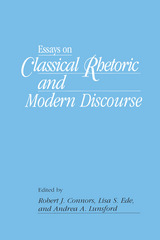 Eighteen essays by leading scholars in English, speech communication, educa­tion, and philosophy explore the vitality of the classical rhetorical tradition and its influence on both contemporary dis­course studies and the teaching of writing.

Some of the essays investigate the­oretical and historical issues. Others show the bearing of classical rhetoric on contemporary problems in composition, thus blending theory and practice. Com­mon to the varied approaches and view­points expressed in this volume is one central theme: the 20th-century revival of rhetoric entails a recovery of the clas­sical tradition, with its marriage of a rich and fully articulated theory with an equally efficacious practice. A preface demonstrates the contribution of Ed­ward P. J.Corbett to the 20th-century re­vival, and a last chapter includes a bibli­ography of his works.

Lisa S. Ede is Coordinator of Composi­tion and Director of the Communication Skills Center at Oregon State University.

Andrea A. Lunsford is Associate Pro­fessor of English and Coordinator of Composition at the University of British Columbia.