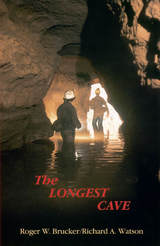 That tantalizing swirl of dye confirmed specula­tions that were to tempt more than 650 cavers over half a century with the thrill of being the first to make human passage of the cave connection. Roger Brucker and Richard Watson tell not only of their own twenty-year effort to complete the link but the stories of many others who worked their way through mud-choked crawlways less than a foot high only to find impenetrable blockages.

Floyd Collins died a grisly death in nearby Sand Cave in 1925, after being trapped there for 15 days. The wide press coverage of the rescue efforts stirred the imagination of the public and his body was on macabre display in a glass-topped coffin in Crystal Cave into the 1940s. Agents of a rival cave owner once even stole his corpse, which was re­covered and still is in a coffin in the cave. Modern cavers still have a word with Floyd as they start their downward treks.

Brucker and Watson joined the parade of cavers who propelled themselves by wiggling kneecaps, elbows, and toes through quarter-mile long crawlways, clinging by fingertips and boot toes across mud-slick walls, over bottomless pits, into gur­gling streams beneath stone ceilings that descend to water level, down crumbling crevices and up mountainous rockfalls, into wondrous domed halls, and straight ahead into a blackness inten­sified rather than dispelled by the carbide lamps on their helmets.

Over two decades they explored the passages with others who sought the final connection as vigorously as themselves. Pat Crowther, a young mother of two, joined them and because of her thinness became the member of the crew to go first into places no human had ever gone before. In that role, in July 1972, she wiggled her way through the Tight Spot and found the route that would link the Flint Ridge and Mammoth Cave systems into one cave extending 144.4 miles through the Kentucky limestone.


In a new afterword to this edition the authors summarize the subsequent explorations that have more than doubled the established length of the cave system. Based upon geological evidence, the authors predict that new discoveries will add an­other 200 miles to the length of the world’ s longest cave, making it over 500 miles long.

AUTHOR BIOGRAPHY
Roger W. Brucker is president of Odiorne Indus­trial Advertising. Inc., in Yellow Springs, Ohio. Past president of the Cave Research Foundation, he is an Honorary Life Fellow of the National Speleological Society. He has written adventure and tech­nical articles related to caves and is the co-author of two other books on caving: The Caves Beyond (with Joe Lawrence) and Trapped! The Story of Floyd Collins (with Robert K. Murray).

Richard A. Watson is Professor of Philosophy at Washington University, St. Louis. He is past presi­dent of the Cave Research Foundation, a Fellow of the National Speleological Society, editor of Cave Books, and has published a novel on caving: Under Plowman’ s Floor. He has participated as a geolo­gist on paleoclimatological and archaeological expeditions in Kentucky, New Mexico, Iran, Turkey, and the Yukon.
TABLE OF CONTENTS
Cover
Title Page
Copyright
Dedication
Cave Conservation
Contents
Illustration List
Preface
Acknowledgments
1. The First Connection
2. The Flint Ridge Con
3. The Rinky-Dink
4. Attempt to Extend Crystal Cave
5. Big Discoveries Expand Unknown/Crystal Cave
6. Refining the Covers and Their Methods
7. Cave War
8. Unknown Cave
9. To Explore the Longest Cave
10. Lost
11. The Colossal/Salts Link
12. Futility in Great Onyx Cave
13. Across the Top of Colossal Dome
14. Jones Pit
15. The Unknown/Salts Link
16. Why Does a Good Caver Ouit Caving?
17. Under Houchins Valley
18. Under Mammoth Cave Ridge
19. Q-87
20. Fatigue and Politics
21. From the Mammoth Cave Side
22. The Pressure Builds
23. Q-87 Again
24. The Brucker Strategy
25. Again Q-87
26. Separating the Man from the Boys
27. "Pete H"
28. The Tight Spot
29. ''Go up Roaring River, Boys"
30. Leak!
31. The Final Connection
32. Victory
Epilogue
Appendixes
Appendix I / Historical Beginnings
Appendix II / Chronology
Appendix III / Glossary of Cave Terminology
Appendix IV / Picture Glossary of Cave Maneuvers
Appendix V / List of Participants
Annotated Bibliography
Afterword
Index
A Note about the Authors
Back Cover