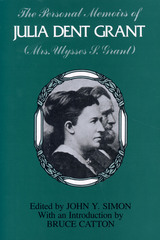 Written in the early twentieth century for her children and grandchildren and first published in 1975, these eloquent memoirs detail the life of General Ulysses S. Grant’s wife. First Lady Julia Dent Grant wrote her reminiscences with the vivacity and charm she exhibited throughout her life, telling her story in the easy flow of an afternoon conversation with a close friend. She writes fondly of White Haven, a plantation in St. Louis County, Missouri, where she had an idyllic girlhood and later met Ulysses.

In addition to relating the joys she experienced, Grant tells about the difficult and sorrowful times. Her anecdotes give fascinating glimpses into the years of the American Civil War. One recounts the night President Abraham Lincoln was assassinated. Grant insisted she and her husband turn down an invitation to the theater. Her decision saved her husband’s life: like Lincoln, he too had been marked for assassination.

Throughout these memoirs, which she ends with her husband’s death, Grant seeks to introduce her descendants to both her and the man she loved. She also strives to correct misconceptions that were circulated about him. She wanted posterity to share her pride in this man, whom she saw as one of America’s greatest heroes. Her book is a testament to their devoted marriage.

This forty-fifth-anniversary edition includes a new foreword by John F. Marszalek and Frank J. Williams, a new preface by Pamela K. Sanfilippo, the original foreword by Bruce Catton, the original introduction by editor John Y. Simon, recommendations for further reading, and more than twenty photographs of the Grants, their children, and their friends.

John Y. Simon (1933-2008), was a professor of history at Southern Illinois University, the executive director and managing editor for thirty-one of the thirty-two-volumes that comprise The Papers of Ulysses S. Grant, for which he was awarded the prestigious Lincoln Prize. He wrote four books, edited several essay collections, and wrote dozens of articles and chapters in other books.