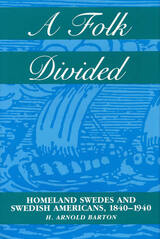 In this unique longitudinal study of how a divided people relate to one another, H. Arnold Barton outlines dilemmas created by the great migration of Swedes to the United States from 1840 through 1940 and the complex love-hate relationship that resulted between those who stayed and those who left. During that hundred-year period, one Swede out of five voluntarily immigrated to the United States, and four-fifths of those immigrants remained in their new country. This study seeks to explore the far-reaching implications of this mass migration for both Swedes and Swedish Americans.

The Swedes were a literate, historically aware people, and the 1.2 million Swedes who immigrated to the United States offer a particularly well-documented and illuminating case study. Barton has skillfully woven into the text translations of little known published and unpublished Swedish sources from both sides of the Atlantic, to embody—in haunting human terms—both what was gained and what was lost through emigration.

Past studies have traditionally shown ethnic mobilization to be a defensive reaction against the exclusive nativism of resident Americans. Barton convincingly demonstrates, however, that the creation of a distinctive Swedish-American identity was at least equally an expression of the immigrants’ need to justify leaving their homeland to their former compatriots and to themselves by asserting a rightful and unique place within the Swedish national community. He concludes that the relationship between Swedes and Swedish Americans was essentially similar to that experienced by other peoples divided by migration, and that the long debate over the United States and emigration at its deepest level reveals both hopes and fears most conspicuously symbolized by America and "Americanization" in an increasingly integrated world undergoing the relentless advance of modernization.

H. Arnold Barton, professor of history at Southern Illinois University at Carbondale, is the author of The Search for Ancestors: A Swedish-American Family Saga, and Scandinavia in the Revolutionary Era, 1760–1815.

REVIEWS
"I believe the author is the first to conceive of the idea of examining in detail how a people were divided by the process of emigration, and how the two halves saw each other and themselves over an extended period of time. . . . It is an exciting idea, and the author has shown in this book how revealing it can be."—J. R. Christianson, Luther College