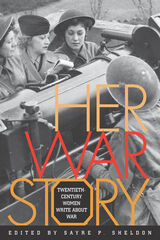 Sayre P. Sheldon chose the twentieth century for this collection of women's war writing because women's roles in war have changed dramatically in this century. The twentieth century has redefined the meaning of combat and expanded the territory of war to include women in larger numbers than ever before. When the technological advances of modern war began to target civilians, the home front became the front line. Women took an active part in war whether or not by choice, often by moving into occupations previously closed to them. Women covered wars for their newspapers, wrote war propaganda for their governments, published their wartime diaries, described fighting alongside men, and used wartime experience for their fiction and poetry.

“Her War Story immediately engaged me. These women's varied voices underscore how wars seep into the nooks and crannies of everyday life.”           —Cynthia Enloe, author of Maneuvers: The International Politics of Militarizing Women's Lives

“Sheldon’s collection of excerpts offers an impressive array of disaparate and passionate voices speaking about humankind’s most destructive activity. . . . Sheldon lets the 70 voices speak, from the glamour or necessity of war to its horror. . . . An anthology of this sort was long overdue.”—Choice