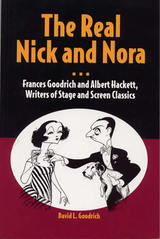 Frances Goodrich and Albert Hackett wrote the screenplays for some of America’s most treasured movies, including It’s a Wonderful Life, The Thin Man, Easter Parade, Father of the Bride, Naughty Marietta, and Seven Brides for Seven Brothers. Legendary films, indeed, but writing both the play and screenplay for The Diary of Anne Frank was their crowning achievement.

Controlled chaos best describes their writing method. They discussed a scene at length, sometimes acting it out. Afterwards, they each wrote a draft, which they exchanged. “Then,” Frances said, “began ‘free criticism’—which sometimes erupted into screaming matches.” Noisy and contentious, the method worked splendidly.

Enormously successful and remarkably prolific, Goodrich and Hackett began their thirty-four-year collaboration in 1928. Married after the first of their five plays became a hit, they were in many ways an unlikely pair. Frances, the privileged daughter of well-to-do parents, graduated from Vassar, then played minor parts on Broadway. Albert’s mother put him on stage at age five, when his father died, to help pay the bills, and he became a highly paid comedian.

The Hacketts were known for their wit and high spirits and the pleasure of their Bel Air dinner parties. They waged memorable battles with their powerful bosses and were key activists in the stressful creation of the Screen Writers Guild. Once they had created Nick and Nora Charles, The Thin Man’s bright, charming, sophisticated lead couple, played memorably by William Powell and Myrna Loy, many people saw a strong resemblance, and the Hacketts acknowledged that they “put themselves into” Nick and Nora.

The Real Nick and Nora is a dazzling assemblage of anecdotes featuring some of the most talented writers and the brightest lights of American stage and screen. The work was arduous, the parties luminous. On any given night the guests singing and acting out scripts at a party might include F. Scott Fitzgerald and Sheilah Graham, S. J. Perelman, Oscar Levant, Ogden Nash, Judy Garland, Abe Burrows, Hoagy Carmichael, Johnny Mercer, Ira Gershwin, George Burns and Gracie Allen, Pat O’Brien, Dick Powell and June Allyson, Dashiell Hammett, Lillian Hellman, James Cagney, and Dorothy Parker.

David L. Goodrich is the nephew of Frances Goodrich and Albert Hackett. He was born in New York City and lives there with his wife. A Yale graduate, he has published magazine fiction and nonfiction, plus two other nonfiction books and a novel.

“This is a wonderful biography of the Hacketts. . . . [L]iterate, informative, well researched, charming, and personal all at the same time. I've told everyone I know to rush out and buy it.”—Leonard Maltin

“The Real Nick and Nora is a thoroughly engaging evocation of the old Hollywood through deft portraits of the wonderfully skilled married couple—Frances Goodrich and Albert Hackett—to whom we owe memorable films and plays from The Thin Man to The Diary of Anne Frank.”—Arthur M. Schlesinger Jr.

“Frances Goodrich and Albert Hackett were probably the most prolific writing team in Hollywood and on Broadway during the glamour decades, when they were literary stars. David Goodrich has written a fascinating account of their bi-coastal careers and a social history of the creative world in which they moved.”  —Dominick Dunne

“Apart from the surreal lives of Frances and Albert Hackett this book captures, accurately and emotionally, the life of theater and movies from the thirties to digital. A must read for theater lovers.”—Al Hirschfeld

“For everyone who yearns to know the real Hollywood in its glory days, this book about the best screenwriting couple in the business is the book to read and cherish.”—David Brown

“For those who wonder how screenwriting teams, as well as married folks, stay happily together, The Real Nick and Nora, a 'dual biography' of screenwriters Frances Goodrich and Albert Hackett, is an entertaining read.”—Daily Variety

“In writing The Real Nick and Nora about the Hacketts and their golden era on stage and screen, Mr. Goodrich has done a genuine service to American theatre and film history.”—Vineyard Gazette

“The Real Nick and Nora is a story about two people who embodied the American work ethic and the satisfactions of a close and enduring marriage. Frances Goodrich and Albert Hackett may not be as famous as many of their friends, but who needs instant name recognition when life has been a banquet of love, friendship, and accomplishment?”—Curtain Up