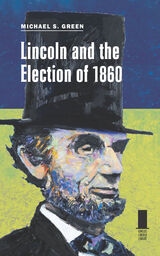 Abraham Lincoln looms large in American memory. He is admired for his many accomplishments, including his skills as an orator and writer, his Emancipation Proclamation, and his unswerving leadership during the strife-ridden years of the Civil War. Now, Michael S. Green unveils another side to the sixteenth president of the United States: that of the astute political operator. Lincoln and the Election of 1860 examines how, through a combination of political intrigue and deep commitment to the principle of freedom, Lincoln journeyed from Republican underdog to an improbable victor who changed the course of American history.

Although Lincoln rose to national prominence in 1858 during his debates with Stephen Douglas, he was unable to publicly stump for the presidency in a time when personal campaigning for the office was traditionally rejected. This limitation did nothing to check Lincoln’s ambitions, however, as he consistently endeavored to place himself in the public eye while stealthily pulling political strings behind the scenes. Green demonstrates how Lincoln drew upon his considerable communication abilities and political acumen to adroitly manage allies and enemies alike, ultimately uniting the Republican Party and catapulting himself from his status as one of the most unlikely of candidates to his party’s nominee at the national convention.

As the general election campaign progressed, Lincoln continued to draw upon his experience from three decades in Illinois politics to unite and invigorate the Republican Party. Democrats fell to divisions between North and South, setting the stage for a Republican victory in November—and for the most turbulent times in U.S. history.

Moving well beyond a study of the man to provide astute insight into the era’s fiery political scene and its key players, Green offers perceptive analysis of the evolution of American politics and Lincoln’s political career, the processes of the national and state conventions, how political parties selected their candidates, national developments of the time and their effects on Lincoln and his candidacy, and Lincoln’s own sharp—and often surprising—assessments of his opponents and colleagues. Green frequently employs Lincoln’s own words to afford an intimate view into the political savvy of the future president.

The pivotal election of 1860 previewed the intelligence, patience, and shrewdness that would enable Lincoln to lead the United States through its greatest upheaval. This exciting new book brings to vivid life the cunning and strength of one of America’s most intriguing presidents during his journey to the White House.
AUTHOR BIOGRAPHY
Michael S. Green, a professor of history at the College of Southern Nevada, is the author of seven books, including Politics and America in Crisis: The Coming of the Civil War and Freedom,Union, and Power: Lincoln and His Party during the Civil War.
REVIEWS
"Michael S. Green has produced a highly readable study of the 1860 election, which . . . appears designed for undergraduate classroom adoption. Green is meticulous about providing context essential for guiding student understanding of a complicated four-way campaign. He also provides sharp portraits of the contest’s memorable cast of characters. But most significantly, Green offers a nuanced depiction of candidate Lincoln, one that manages to emphasize both his 'shrewdness and, when necessary, his selfishness.'”—Matthew Pinsker, Journal of the Civil War Era

"In Lincoln and the Election of 1860, Michael S. Green provides a short, useful synthesis. While fully up-to-date in terms of sources, it is classic insider political history that manages to restore genuine suspense to a well-worn story."—Stewart Winger, Journal of Southern History

"With keen insights . . . Green presents Lincoln as an exceptionally talented political operative who worked hard to get the Republican presidential nomination. [He] provides an intelligent and felicitous narrative of Lincoln’s rise to power during the 1850s [and] a learned and astute account of the 1860 national Republican convention in Chicago.”—Mitchell Snay, Project Muse

"It is easy for modern audiences to forget that Lincoln, above all, was a politician. College of Southern Nevada history professor Michael S. Green reminds readers of this fact. He examines Lincoln's role in the presidential campaign of 1860, and emphasizes not only what Lincoln publicly accomplished, but also what he did behind the scenes."—S. Chandler Lightly, Journal of the Illinois State Historical Society

"This must surely be the best brief account of the 1860 election available. Green has crafted a fast-paced narrative of one of the most exciting electoral contests in history. The well-known characters involved-Seward, Chase, Douglas, and, of course, Lincoln-take on new life as Green recounts their dazzling political skills and occasional foibles. Filled with great anecdotes but informed by the best of recent scholarship, this is the book to read to get a quick glimpse into the whirlwind of politics on the eve of the Civil War."—Michael Vorenberg, author of Final Freedom: The Civil War, the Abolition of Slavery, and the Thirteenth Amendment

“Green gives readers a seat at Lincoln’s elbow during the 1860 campaign, revealing the candidate’s principles and political savvy. We watch as Lincoln courts friends, soothes opponents, and plots his own election, all while maintaining the illusion that he is above the fray. Green’s extensive research and deep knowledge of the era give us an engaging and definitive picture of why the 1860 election turned out the way it did, and just what kind of a man it put into the presidency.”—Heather Cox Richardson, author of West from Appomattox: The Reconstruction of America after the Civil War

“Anyone who wonders how and why Abraham Lincoln became the nation’s sixteenth president will find the answers in this lucid and insightful account.” —Eric Foner, DeWitt Clinton Professor of History, Columbia University

"Michael Green has produced a well-written and lively account of Abraham Lincoln and the election of 1860 that will appeal to both scholars and general readers. Scholars will appreciate the synthesis of generations of scholarship and Green's eye for quotes that are both uncommon and telling. General readers will enjoy the lively and crisp narrative that unfolds the dramatic events of how Abraham Lincoln became president of the United States."—Andrew Slap, author of The Doom of Reconstruction: The Liberal Republicans in the Civil War Era

"Deeply researched, thoughtfully structured, and written in an eloquent and highly readable language, the book offers a concise, coherent, and insightful account of how Lincoln won the most important presidential election in the nation's history. With fresh materials, insights, and wit, Lincoln and the Election of 1860 advances our understanding of not only how Lincoln had been produced by his time but more importantly how he, through the election, had evolved from a politician into a statesman with the ability to strike a perfect balance between personal ambition and commitment to the party's and nation's cause. The book is indisputably an essential reading for Civil War and Lincoln studies, as well as a classical manual of party politics of nineteenth-century United States."—Xi Wang, author of The Trial of Democracy: Black Suffrage and Northern Republicans, 1860-1910

"Little known outside his state at the beginning of the 1850s, the long-shot Lincoln rose from an often frustrated local politician to lead the Republican party in the critical contest that brought him and his party to power. In addition to retelling the story, Green stresses Lincoln’s sustained, vigorous involvement in his drive for the nomination and in the campaign that followed. . . . Readers looking for a short account will get a useful introduction to understanding a complex, and ultimately victorious, highly intelligent and committed politician."—Joel H. Silbey, Journal of the Abraham Lincoln Association

"Lincoln and the Election of 1860 by Michael S. Green focuses upon the political acumen of Abraham Lincoln in one of the most critically important presidential campaigns. . . . a welcome and highly recommended addition to personal, community, and academic library Lincoln Studies and 19th Century American History collections."—James A. Cox, Midwest Book Review — -

1 Prelude to a Turning Point
2 Tasting a Candidacy
3 Everybody’s Second Choice
4 From Candidate to Leader
5 The Making of the President, 1860